The Light Thief, Film,/Kyrgyzstan, written and directed by Aktan Abdykalykov, 3***out of 5

Managers in Non-Governmental Organisations (NGOs) nowadays have to spend much of their time attending cocktail parties at the UN in Geneva and New York or networking at the World Economic Forum in Davos, it is difficult for them to keep up to date with developments in the field. Luckily the are talented writer-director-actors such as Aktan Abdykalykov in Kyrgyzstan, who allow them to get an authentic picture of the problems that befall potential clients of their NGOs, without having to do any more tiresome travelling than a ride to a “theatre near you”.

The “Light Thief” in this story is Svet Ake. He lives in a rural community and is an electrician with a heart of gold. For some impoverished members of his village he will fix the electricity meter so that it runs backwards. Svet Ake is married with a little daughter. He loves his village and his family. He also maintains the traditions of the culture of his region which includes a mild form of Islam and respect for the high-hatted elders in the village, who are consulted and involved in decisions about the common good.
After the death of one of the elders, an evil young local profiteer gets his straw-man elected as the new mayor. He has his sights set on the profit opportunities that land sales can provide in the era of globalisation.
He understands that the man who may stand between him and a large amount of money is the electrician; so he tries everything from persuasion, to bribery and threats to get Svet Ake on his side.
It is rather comforting to a Western audience that the visiting potential buyers of Kirghiz land are not evil Westerners, but a delegation of no less evil Chinese officials. They are wined, dined and offered the sexual favours of a young woman of the village.
Svet Ake does not give in and is dealt with in a brutal manner by the mayor's henchmen. There is no Happy End for the “Good Man from Kyrgyzstan”.
http://www.imdb.com/title/tt1646979/ 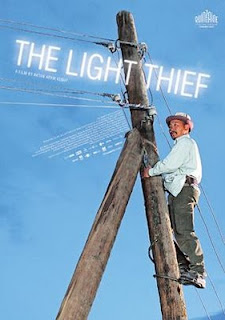 Posted by A London Theatregoer at 12:45