Win Win, Film Drama, Written and directed by Thomas McCarthy, 4* out of 5

Mike Flaherty is a struggling small-town lawyer trying to make a living in a small New Jersey town suffering from the after-effects of the 2008 Financial Crisis. Outside his job he is a husband and a father and occasionally engages in home repairs as he cannot afford plumbers or tree surgeons. And he volunteers as a coach to the unsuccessful high school wrestling team. As his financial situation gets tighter, he suffers from anxiety attacks and decides for a small but important financial gain to unethically obtain the guardianship of a client heading toward dementia. Things start getting complicated when the client's 16 year old grandson shows up.
In a recent article for the anniversary issue of the New Yorker, Rebecca Mead, a scholar and expert on the novels of the 19th century female author George Eliot highlights the author's “quiet celebration of the unremarkable.” To illustrate, Mead quotes the final sentence from the novel “Middlemarch” “The growing good of the world is partly dependent on unhistoric acts; and that things are not so ill with you and me as they might have been is half owing to the number who lived faithfully a hidden life and rest in unvisited tombs”.  Had she lived in the 21st century, George Elliot would have liked Thomas McCarthy, author and director of the film Win Win.
Win Win is a film about the capacity of ordinary people to make a big difference for the good, when despite all their shortcomings and ethical ambiguities they strive to do the right thing. Without being gushy, it also shows the paramount importance that family can have as a  locus of enduring meaning, safety and support.
The low key acting performances in this film are all of high quality. Paul Giamatti (as Mike Flaherty) is as good as ever. Amy Ryan, as his wife, is outstanding. For the role of the 16 year old Flaherty picked a young school-wrestler without acting experience; the talented Alex Shaffer gives a very competent and credible performance.
This is an intelligent, enjoyable and entertaining film. Go and see it soon. 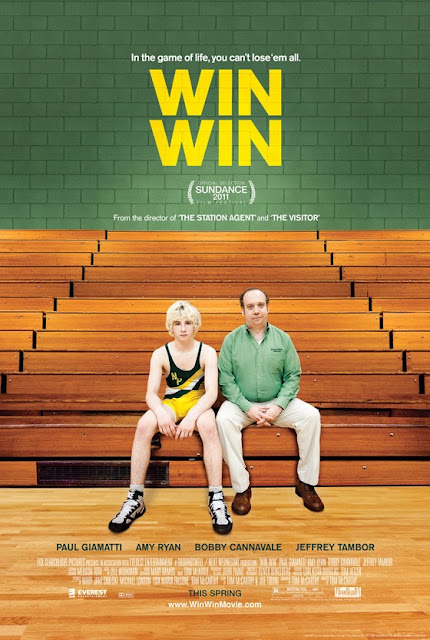 Posted by A London Theatregoer at 17:32