Nader and Simin – A Separation, Film written and directed by Asghar Farhadi, 4* out of 5, highly recommended

Nader and his wife Simin are at the family judge about their divorce. They had planned to leave Tehran and go abroad with their 11 year old daughter Termeh. But now Nader's father is showing symptoms of Alzheimer's Disease and Nader does not want to leave. Simin wants Nader to think about his daughter's future rather than his father's present. She does not really want to divorce him at all. If he would go abroad with her before the visa expires in 40 days. 11 year old Termeh has her own agenda: keeping the family together, whether in Tehran or abroad. But Nader is determined, proud and stubborn when it comes to defending what he thinks is right and is his right. He will let Simin go. He will agree to the divorce, but he wants to keep Termeh. Simin is more pragmatic than Nader but a strong and determined woman. Without her daughter she will not go abroad. So, Simin moves to her parents who are supportive of their daughter and respect their son-in-law. When Simin and Nader arrange for a housemaid to ensure their Nader's father is supervised, they find Razieh and Hodjat, a very religious couple living in relative poverty. Hodjat has lost his job and needs to satisfy his creditors. Razieh, who is pregnant and has a young daughter, is seeking work without Hodjat's knowledge, to make ends meet. Then events take a dramatic turn.

This film is a high quality family and court room drama full of suspense. The problems the protagonists have to deal with and the way they react are familiar. We can identify and empathise with every character. The inner and outer conflicts are the consequences of events and character traits that we have come across in ourselves and people we know.
The fact that the story plays in today's Iran adds a special twist. The legal and state institutions are unfamiliar and seem strange to us. One instance is the emergency telephone helpline Razieh calls for sorting out a practical question according to the precepts of Iranian Shiite version of Islam. But the protagonists' actions and feelings, their aspirations and the manner in which they navigate their state and legal institutions seem very familiar, easy to understand and to empathize with for any Western audience.
Don't miss this suspenseful, thoughtful, high quality drama. Great cinema, the film thoroughly deserves the Golden Bear Prize it received at the Berlin Film Festival earlier this year. 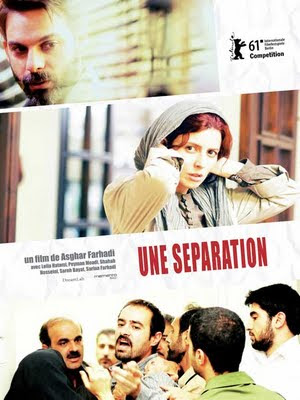 Posted by A London Theatregoer at 12:48