Phenix is a large French Bank. Its Chief Executive Officer Jacques Marmande (Daniel Mesguich) collapses on the golf course due the advanced state of the testicular cancer he has kept secret from his colleagues. From his hospital bed Marmande and the board of directors appoint his young, ambitious assistant Jacques Tourneuil (Gad Elmaleh) as his temporary  replacement. They believe that Tourneuil is the kind of figurehead they will be able to steer and, at the given moment, replace with the an appropriate long term CEO from the upper reaches of the French establishment. But they have underestimated Tourneuil’s limitless ambition, cojones and political skill which have been honed in a five year spell at Goldman Sachs before he joined Phenix. His apprenticeship at the top US investment bank, the epitome of the ruthless Anglo-Saxon money making machine and the Nemesis of paternalistic French state-capitalist wheelings and dealings, make Jacques a more formidable figure than his colleagues had expected. Enter a private-equity fund backed by Gulf Money which demands immediate exorbitant returns for its shareholders and is willing to oil the wheels of its sinister machinations with drugs and supermodels, and we can see that the newly appointed CEO has a lot on his plate.

Will Jacques Tourneuil be able to stand up to all these pressures? Will he understand that money is not everything, as his wise and loyal wife Diane (Natacha Régnier) advises?

French director Costa Gavras is a towering figure in the world of film making, who has never shied away from delivering a clear ideological message in his political thrillers. In his Oscar winning film Z he illustrated the evils of the military regime in 1960s Greece; in Missing the brutal methods of  General Pinochet in 1970s Chile. Now in his eighties, Costa Gavras still has the keen eye and youthful enthusiasm to show us his vision of how our globalized financial system perpetrates great social injustice, while its protagonists live in a dog-eat-dog world that makes them impervious to feelings of empathy. And Costa Gavras still manages to do this in the form a politico-economic thriller that is suspenseful and holds our attention.

In this film, he makes extensive use of fondly held French stereotypes about Anglo-Saxon character traits: evil thrives on globalisation, lives in Miami and speaks with a clipped English accent. Our French protagonist comes from a lower middle-class background and insists on only speaking English to his rather uninterested teenage son; surely, no good can come of that!

One would have liked to see more differentiated characters. Having said that, recent actual events around the former French Chief of the International Monetary Fund, Dominique Strauss-Kahn, are just one example showing that  “Anglo-Saxonized” French and other bankers engaging in pillage, rape and frequent use of illegal stimulants are unfortunately not a vision that can be confined to the realm of fiction.

All the redeeming characters in Capital are women, but unfortunately, just as in the real world, the highest levels of financial decision making are closed to them.

Besides Costa Gavras’ direction, the strengths of Capital, are the fitting musical score and the acting performances, in particular, Gad Elamaleh as Jacques Tourneuil, Bernard Le Coq as the most powerful member of the Board of Phenix, Antoine de Suze, and Daniel Mesguich as Jacques Marmande the soon to be defunct CEO of Phenix Bank.

Capital was shown as part of Le Long Weekend of French film organised the UK Jewish Film Festival. There is nothing particularly Jewish about the subject of this film or of others shown during “Le long Weekend”. So, Jewish or not, it’s worth checking regularly on the UKJFF’s website (http://ukjewishfilm.org) for upcoming events in the UK, Switzerland, Israel and beyond.The organisers are to be congratulated on assembling a series of high quality French films and giving UK film buffs the opportunity of a Q&A with Costa-Gavras. 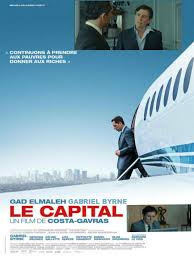 Posted by A London Theatregoer at 14:51