Herzliyah in modern day Israel; the Arab Israeli surgeon Amin Jaafari (Ali Suliman) has reached the pinnacle of his career. As he is decorated with the highest prize the Israeli Association of Surgeons awards for excellence. Happily married for 15 years, he knows how to confidently deal with the occasional expression of suspicion from his Jewish-Israeli co-workers and patients, among whom he has made good friends. All his focus has been on building a successful career and social-life as an Arab citizen of the Jewish state; but a suicide bombing in a restaurant not far from the hospital where he works will turn his world upside down. It is a beginning of a journey that will force him to reengage with his roots and change how he reconciles his conflicting identities.


Based on a bestseller by the Algerian writer Yasmina Khadra (a male writer who has his novels published using his wife’s first name), the talented and courageous Lebanese filmmaker Ziad Doueiri wrote and directed this riveting psychological thriller in Israel with a largely Israeli cast. The screenplay brings out nuances in the characters, which are skilfully picked up by the excellent actors. Ali Suliman’s performance as Dr. Jafaari is outstanding.
Due to the politics of the Middle East, The Attack has been banned from being shown in all Arab countries. Moreover, by shooting the film in Israel, the Lebanese director has broken Lebanese law that bans Lebanese citizens from any contact with Israel.

One can only hope that as many citizens of the countries which have banned this film from being shown in their cinemas, on their travels outside the Arab world. Irrespective of the politics around its release in Arab countries, The Attack is a moving and intelligent psychological thriller that holds its audience on the edge of their seats from start to finish. 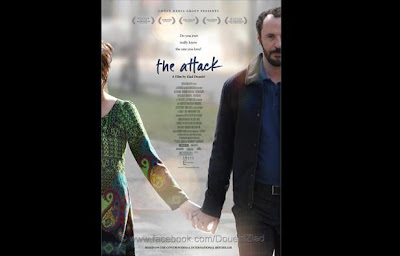 Posted by A London Theatregoer at 11:40