The Red Prince - The Fall of a Dynasty and the Rise of Modern Europe, Book by Timothy Snyder, Vintage Books, London 2009, 9* out of 10

The Red Prince tells the story of Wilhelm, the second of four sons of Stefan, an Austrian Archduke and member of the illustrious von Habsburg family, which, when Wilhelm was a child in the 1890s, had for hundreds of years ruled large parts of Eastern and Central Europe, not to speak of its Spanish branch, whose reign over that country and its vast colonies had ended somewhat earlier.

During the dramatic and turbulent first half of the 20th century in Europe, Wilhelm plays a minor, though by no means insignificant role in the attempts of the Austrian imperial and royal family  to hold on to its reign (or failing that some remnant of that reign) in all or part of the Austro-Hungarian Empire.

The long-term master plan for his children was set out almost at birth by Wilhelm’s father the Archduke Stefan. Together with the ethos of the family, and Wilhelms own colourful personality it makes Wilhelm’s biography worthy of any fictional historical novel. There are encounters with powerful historical figures of the early 20th century, such as Kaiser Wilhelm and of less powerful yet famous personalities like the French music hall star Mistinguette who publicly toyed with the idea of becoming Wilhelm wife.  He on the other hand was more interested in exotic young men.

In his meticulously researched and entertainingly written book, Timothy Snyder, not only introduces us to many colourful characters populating Europe’s upper echelon’s in the first half of the 20th century; he also gives a timely and readable insight into the little history of the region that is today Ukraine but also touches on Poland and Russia. As the centenary of World War I is being marked in many Western countries, very little is being said about the course this war took on its Eastern front.  In the course of following young Wilhelm’s early military career we learn about the beginnings of today's Ukraine as a nation and a state, and about the role Wilhelm played in it, under his Ukrainian nom de guerre Prince Vasyl Vishivanyi, as a young officer at the head of a Ukrainian regiment fighting for the Austro-Hungarian Empire against the Russians.

We also follow Wilhelm through the stormy interwar period where he changes his political convictions from Royalist multiculturalist philosemitic Austro-Marxist, hence the "Red" in his princely epithet, to briefly fascist, antisemitic supporter of Adolf Hitler to his premature death in a Soviet political prisoner camp. On the way we meet some other interesting characters of the von Habsburg family who put up resistance to the Nazis and ensured the brewing of beer in the largest Polish brewery in Żywiec, owned today by the Dutch drinks giant Heineken but housing in one of its buildings a niece of our protagonist.

As a famous historian put it: “The future is fixed, the past is always open to debate”.  Reading The Red Prince is not only enjoyable, but can help making our debates about the past and future more informed. That, surely, must be a good thing. 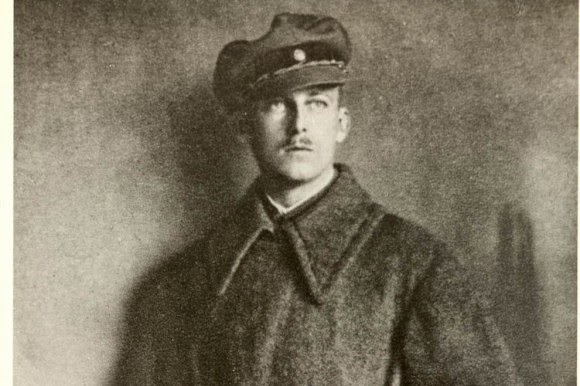 Archduke Wilhelm von Habsburg, The Red Prince
Posted by A London Theatregoer at 15:49