Filmed in a realistic documentary style, Deux Jours Une Nuit (Two Days One Night) is social drama at its best. The Dardennes' excellent screenplay shows the impact of a difficult moral dilemma on relationships at work, within the family and among friends. Marion Cotillard’s performance is brilliant.

In many a fairy-tale the hero has to accomplish a seemingly impossible task to win a cherished prize. In the process he learns about his own strength and weaknesses and finds out, who his true friends are.

At first sight the Dardenne-brothers’ latest film Two Days One Night is about as close to being a fairy tale as the fictional Captain Picard’s Starship Enterprise is from planet earth; but on closer inspection…

Sandra (Marion Cotillard), just recovered from a bout of depression, is ready to return to her workplace at SunWal a small enterprise producing solar panels in Wallonia, the economically declining French-speaking part of Belgium. SunWal’s owner/manager has decided that in order to survive in an extremely competitive market, he has to cut costs to improve productivity.  This being Europe, the boss believes in co-determination: workers on his shop floor will get some say in in this; he will determine the what it is they can decide on.  The question on which lets them organise a vote, is whether to let Sandra go and everyone else keep their annual bonus (of EUR 1000) or to keep Sandra on and everyone give up their annual bonus.  After a first vote that results in a clear majority for letting Sandra go turns out to have been irregularly influenced by the foreman, the boss agrees that the vote should be retaken. Although she still suffering from the after effects of her depression, Sandra, encouraged by her friends and urged on by her husband (Fabrizio Rongione), has the weekend to campaign on her own behalf before the vote will be retaken.  She is reluctant to do this, but knows that without her salary her young family will be in dire straits. As she canvases her 16 colleagues asking for each one’s support the social drama of the aftermath of the financial crisis in Europe and the dramatic side effects of globalization on people’s lives is brought down to a human and personal level that is genuinely moving.

Filmed in a realistic documentary style, Two Days One Night is social drama at its best. The Dardennes' excellent screenplay shows the impact of a difficult moral dilemma on relationships at work, within the family and among friends. The suspense as to the outcome contrasting with the understated style of direction and acting serves to amplify the strong emotional impact on the audience.  While maintaining their social realism throughout, the Dardenne-brothers manage to leave the audience with some optimism about the strength of the human spirit. Amid an excellent ensemble cast, Marion Cotillard shines with a brilliant performance as the struggling Sandra having to stand up for herself while fighting for her job, her family and her sanity. Highly recommended. 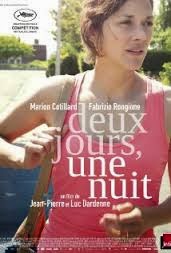 Posted by A London Theatregoer at 13:54