The Nether, Play by Jennifer Hayley, directed by Jeremy Herrin, Duke of York’s Theatre, London 9* out of 10

In a tastefully architected Victorian country house set in idyllically landscaped grounds Sims (Stanley Townsend) is the owner manager of a brothel. In a beautifully appointed bedroom twelve-year-old Iris (Isabella Pappas/Zoë Brough) receives shy young Woodnut for whom she is the preferred prostitute.

Back to the not so distant future (the year 2050) and a sparsely furnished interrogation room. Sims looking less than elegant and shabbily dressed in modern casual attire is being subjected to interrogation by agent Morris (Amanda Hale) about his activities in a part of the internet where anything goes, the Nether.

It soon becomes clear that the Victorian House is a fantasy world conjured up in disturbing realism on the Nether,  in a "Second Life" -like world with no sexual phantasies barred.  And the characters' identities in their actual and virtual realities may not all be what they seem.

At a time where the British establishment is reeling from what appears to be institutionalised child sexual abuse, Jennifer Hayley’s disturbing and important play makes very uncomfortable viewing. Although the sexual abuse which takes place is very carefully dealt with on stage, the inner discomfort of the audience at reluctantly picturing (or resisting the picturing of ) what is hinted at makes for a tense atmosphere.

Jennifer Hayley's tautly written sci-fi thriller throws up many important questions: How far can government agencies go when investigating what people do on the internet? Do sexual crimes carried out in virtual worlds by the chosen avatars of real people count as real sexual crimes punishable in the real world? Are our chosen identities on the Nether (Internet) just as real as our identity (or identities) in real life?

This Royal Court Theatre production has much to commend it. Es Devlin’s set is brilliant, and excellently complemented by the lighting (Paul Pyant) and video design (Luke Halls).  Jeremy Herrin's direction keeps the audience in suspense and under tension. The acting ensemble is excellent. Stanley Townsend’s performance as Sims stands out; so do the child actresses Zoë Brough and Isabella Pappas who play Iris in alternate performances.

It was good to see many more young people than usual for a West End theatre transfer. This is an uncomfortable, suspenseful and worthwhile evening at the theatre that will stay with the audience for a long time. 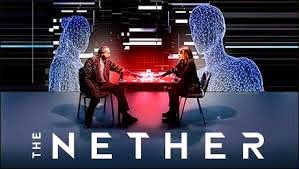 Posted by A London Theatregoer at 14:09