Spy is two hours of good slapstick, witty repartee and unadulterated, laugh-out-loud fun. Besides the screenplay, it is the great performances in the supporting roles that give this film the sustainable energy, which lasts beyond the final credits.

Susan Cooper (Melissa McCarthy) and Bradley Fine (Jude Law) are a team. Bradley is the suave elegant super-spy with a licence to kill; Susan is the guiding voice in his ear from central command, without which Bradley’s derring-do would long have ended in his ultimate demise. Together with her however, he appears elegantly invulnerable in the most dangerous situations, while she is as invisible and eminently forgettable to her senior management as she is indispensable to Bradley’s success. To her colleagues in the vermin infested windowless open plan office, Susan is the mostly harmless cake-baking desk clerk analyst and homely single woman in her forties. But, “events dear boy, events” will soon turn her life and reputation upside down.

As far as James-Bond spoofs go, this is a very successful one. It is witty and subversive; and the social comment is deeper than can be expected from the genre. Not quite the Dardenne brothers social drama, but some memorable  “makes-you-think” moments.

Besides the screenplay, it is the great performances in the supporting roles that give this film the sustainable energy, which lasts beyond the final credits. Jude Law and Allison Janney are good. Jason Statham and Peter Serafinowicz live up to the great character roles they have been given. And among this great cast, Melissa McCarthy, in the main role is a Dawn French look-alike (think The Vicar of Dibley) with just as much comedy talent. She manages to make her character an unlikely female role model – both lovable and respectable.

My only criticism of Spy is that the few scenes of blood and gore were unnecessarily graphic for this genre.

Spy is two hours of good slapstick, witty repartee and unadulterated, laugh-out-loud fun. Knowing Hollywood, Spy 2 is probably already in the works, but, as spoof comedies go, this one is a hard act to follow. 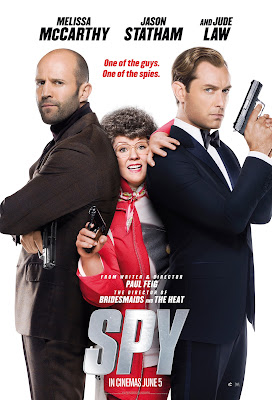 Posted by A London Theatregoer at 14:12