Literaturhaus Zurich high noon. About 100 members of Zurich society sip champagne, wine and orange juice, nibble on blinis with salmon caviar and catch-up on the latest Zurich gossip. They have just attended the ceremony awarding the brand-new Jonathan Swift Prize for Satire and Humour in International Literature of the Werner Dessauer Foundation.

The Burghers of Zurich have many things in abundance: champagne, wine and blinis with salmon caviar among them; humour and satire however are in somewhat short supply. But the Swiss are nothing if not practical and so they have decided to import what is locally in scarce supply.

Therefore, the Jonathan Swift International Literary Price for Satire and Humour will henceforth be awarded every year. Eligible are living authors with no restriction of provenance and nationality, who either write in or have been translated into German.

The first Jonathan Swift Prize has been awarded to an Austrian author living in Berlin Eva Menasse, who having received her award cuts a lonesome (though perhaps not lonely) figure in the foyer next to the bookstand on which her various publications are available for sale. And very kindly she is ready to sign a book or two, bought by those few attendees of the ceremony who may actually have been brought here because of their passion for quality literature. She looks rather relieved to stand here in the foyer rather than joining the cocktail party.

An hour earlier, at 11:00 am sharp the award ceremony had begun.

The publisher Gerd Haffmans, explained who Jonathan Swift the author of Gulliver’s travels and the rather shocking Modest Proposal was and managed to digress incongruously to Samuel Pepys, the German translation of whose diaries he had recently published.

Helmut Schödel from the Süddeutsche Zeitung spoke with insight and skill about the work of award winner Eva Menasse, doing his job professionally and thoroughly as you would expect from a German journalist and professor and keeping scrupulously to the the time allocated to him.

Apart from the master of ceremonies, the Swiss author and member of the jury Charles Lewinsky, whose very readable and funny family saga Melnitz is available in English, the first speakers seemed rather sombre, especially for a prize that is dedicated to satire and humour. Perhaps this was out of politeness, a desire to leave the monopoly of "good humour" in both senses of its meaning to the protagonist of the event.

Eva Menasse’s acceptance speech dealt with the nature of humour and distinguished between two very different kinds of humour, one that thankfully she doesn’t have a lot of time for (the one that is present at the German and Carinthian Carnival) and the other one that is central to her writing.

Best known for her autobiographical novel Vienna she is an excellent exponent of the fine Viennese-Jewish tradition that one could be forgiven for thinking had been erased the special German thoroughness amplified with the special Austrian nastiness directed towards the Jews of Germany, Austria and the rest of Europe between 1933 and 1945. Against all the odds though, a small but significant and visible group of Viennese writers with (semi)-Jewish roots, whose parents had somehow escaped the fate prepared for them by the German Nazi government and its more or less enthusiastic acolytes, grew up in post-World-War-II Vienna. There they found not only their distinctive voices, that have enriched modern German-speaking literature as a whole, but also with resolute political engagement courageously, yet inevitably less successfully, fought against against racism and anti-Semitism in post-war Austria. They include Robert Schindel, Eva Menasse’s brother Robert and the Tel Aviv born Viennese historian and novelist Doron Rabinovici.

Born in 1970, Eva Menasse is probably the youngest of that "second generation group" of Viennese authors. She is also the only woman among them, which makes her achievement as a journalist in the Austrian quality journal Profil and as an editor on the Frankfurter Allgemeine Zeitung especially remarkable.

With an unerring sense for the perfect epithet, she has become expert at explaining Viennese-ness to the Germans and the German-ness to the Viennese. In the process, Viennese and Germans can unwittingly learn even more about themselves than about each other.

Central to the success of Menasse’s writing is the role humour has in it: it is the key instrument that allows the reader to gain insight into difficult subjects; difficult because, flawed emotional sentient thinking beings that we are, we are programmed to jump to conclusions that allow us to repeatedly confirm our most dearly held preconceived ideas and prejudices.

Eva Menasse masterfully makes her and our preconceived ideas and notions ricochet around the brain, slowing them down just enough to create that little space for reflection, including self-reflection, which is needed to give us room for really considering another point of view -  a process that is indispensable to learning and understanding.  She does this authentically and humanely, not like many of her German colleagues with the moral index finger held high, but with deploying humour in a way that exercises our deep-thought muscles like a Pilates session exercises the deep muscles, that we need keep us straight and upright. That is probably why she does this quite successfully. Besides, Menasse’s humorous prose  makes for a damn enjoyable read.

As befits a worthy winner of a prize that carries the name of a British/Irish satirist, Menasse’s highly successful, thought-provokingly humorous and critically acclaimed first novel "Vienna" has been published in English translation (and I hope still in print). I can recommend it; and I am already curious to see who the jury will select as Zurich's purveyor of fine satire and humour in literature next year. 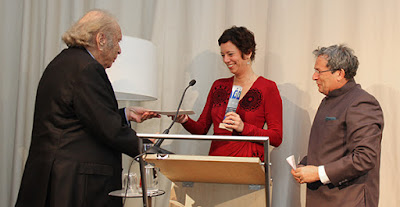 Posted by A London Theatregoer at 14:24