At the British Museum in London this summer, the under water archeologist Franck Goddio presents stunning, beautifully preserved statues and objects from the last 20 years of his exploration of two Egyptian sunken cities in the Nile delta, Thonis-Heracleion and Canopus. An unforgettable museum visit.

In a short and stellar military career, Alexander the Great accepted the religious and cultural practices of the countries he had conquered. Soon after Alexander’s premature death in 323BC, Ptolemy I Soter, a Macedonian like Alexander and a general, friend and possibly half-brother of Alexander, obtained his wish to be named ruler of Egypt. He established a dynasty that would rule that country into Roman times, ending with the dramatic death of the Cleopatra VII (who in most people's minds will look forever like Elizabeth Taylor dressed in Egyptian costume).

Ptolemy I Soter and his successors adopted and enhanced the cultural and religious traditions of the land they had come to rule and encouraged the development of strong religious and cultural links between Egyptian, Greek and finally Roman mythology and religion, which was reflected in the practices as well as the works of art of the time.

This summer at the British Museum in London, the spectacular and beautiful exhibition “Egypt’s Sunken Cities”  provides a dramatic illustration of how Egyptian Greek and later Roman Culture interacted during the reign of the Ptolemaic dynasty. Two important cities of the time Thonis-Heraclion, a centre for trade and Canopus, a centre for worship of Egyptian gods, which lay in the Nile delta slowly sank into the muddy waters of the Nile and Mediterranean and had eventually to be abandoned by their inhabitants. There they lay hidden and untouched by grave robbers, until they were first rediscovered by the British in the 1930s. But the retrieval in earnest of most wonderfully preserved artefacts from the watery depths is the work of French under-water-archaeologist Franck Goddio and his team, who have been uncovering the beautiful secrets of these two sites for the last 20 years.

The spectacular results are marvellously assembled at the British Museum until November 2016; there they are put in context by the museums experts and enriched with filmed under-water sequences of the divers’ work.

It is a wonderfully impressive and evocative exhibition about the interaction of our cultural heritage during a period of great mutual interaction among the cultures and civilisations that formed our age, augmented by the fascinating tale of their discovery and the work of the archaeologists. In the audio-tour the curators and experts of the British Museum and Franck Goddio himself vividly tell us the story of Egypt under the Ptolemaic dynasty and the excitement of finding unique objects of this advanced multicultural urban civilization under water. An unforgettable museum visit. 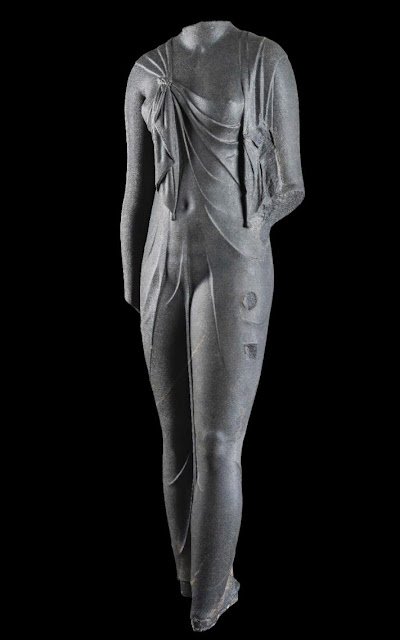 Posted by A London Theatregoer at 16:14