Amadeus, Play by Peter Schaffer, National Theatre, London , 8* out of 10

The revival of this powerful drama by Peter Schaffer on the stage of the National Theatre in London successfully weaves the live music and the members of the orchestra into the action on stage. Lucian Msamati gives a strong performance as a black Salieri, who becomes angry and vengeful towards God. Director Michael Longhurst and his cast create a beautifully entertaining and thought provoking evening at the theatre. A production which thoroughly deserves its sell-out run.

Vienna in the 1780s. Now in his 20s, and married to Constanze Weber (Karla Crome), the former travelling pianist-wunderkind Wolfgang Amadeus Mozart (Adam Gillen) comes to Vienna to launch, what he hopes will be a successful career as a freelance composer. Convinced of being the best (which indeed he is), he is a rather childish and uncouth figure, not adept at playing the politics in the Vienna cultural scene at the Court of the Austrian Emperor Joseph II. Here, Antonio Salieri (Lucian Msamate) is the celebrated composer carefully building his musical career and social status. Contrary to Mozart, he is a master at the political game and a paragon of morally irreproachable behaviour, faithful husband to his wife and member of charitable committees. He believes that his success is due to a promise he made to serve God faithfully in return for success in his art and profession. But, the appearance of the vulgar childish young Mozart, who despite of his silliness and immoral behaviour seems to have been chosen by God as the vessel for composing the most divine music with apparent ease, shakes the foundations of Salieri’s faith and thus an important part of his identity. Salieri’s love for God gradually turns into a deep and damaging feeling of anger at being undeservedly mocked by him with ever escalating consequences.

Recounted by Salieri many years after the events, Amadeus tells the story of Mozart’s time in Vienna, through the memory (or phantasy) of Salieri as a clear sighted (or confused) old man, whose conscience is plagued but what he did (or what he imagined he might have done) to his rival Mozart. In short, while, according to the historians, the story told here, based on an actual rumour at the time, is not true at all, it is beautifully imagined and told. Also, Mozart was not as eccentric and socially dysfunctional as he is presented in this play. But divergences from history do not make Schaffer's play any less moving and powerful or it's main characters any less memorable.

The story of Peter Schaffer’s brilliant theatre play is best known through Milos Forman’s excellent film adaptation; the National Theatre’s new production of the original play brings us back to the theatrical origins. Sadly, playwright Peter Schaffer died in June 2016.

Amadeus, Mozart’s middle name, means loved by God and it is no accident that Schaffer chose it as the title for his play: Salieri cannot accept why God would endow the undeserving Mozart with such musical talent, rather than the god-fearing Salieri himself. He perceives this as a cruel and unfair joke that God is playing on him.
Lucian Msamati is an excellent Salieri, a complex character overwhelmed by Mozart’s divine music and full of anger at God for giving such a gift to someone so undeserving. Having a black actor playing a character moving in the higher social circles of 1780’s Vienna is not as historically odd as it may seem: the very real black Angelo Soliman (see picture below), originally from today’s Nigeria or Northern Cameroon, played a prominent role in Vienna’s Freemasonry in the 1780’s and was an acquaintance of Mozart’s. However, the decision by director or the actor, to give Salieri an Italian accent when he speaks in English is a pity; the beautiful and powerful lines given to Salieri by Schaffer should be spoken in English free of any artificial foreign accent. Moreover, at times Msamati briefly seems to fall into another accent altogether. All this is unnecessarily distracting, but the brilliant physicality and sonorous voice of Msamati more than makes up for this slight flaw.

The other outstanding performance is Karla Crome’s as Mozart’s adored and loving wife Constanze. She is the smart and cunning adversary to Salieri. Constanze defends her Wolfgang’s interests with all she’s got, while taking advantage of the social and sexual freedom this period of the Enlightenment allows her, despite of an adoring jealous husband and a disapproving society. Mozart himself is of course not averse to trysts with his high society groupies and adoring sopranos but Constanze remains his one true love.

The special feature of director Michael Longhurst’s production is that Mozart’s music, which is skilfully woven into the dramatic action on stage is played and sung live. This provides some challenges to dramaturgical choreography which are beautifully resolved by bringing the musicians into the action on stage and giving this production its unique character with a special energy and aura. The acceptable drawback is that when the music is background to dialogues or soliloquies on stage, hearing the important sometimes lyrical text can be difficult.

The great creativity of the production and the high quality of the acting, singing and musicianship by the entire ensemble brought out the strengths of Schaffer’s powerful play. A beautifully entertaining and thought provoking evening at the theatre, for a production which thoroughly deserves its sell-out run. 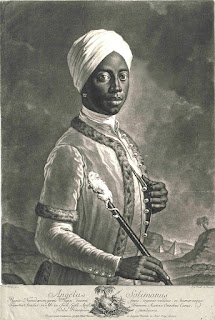 Angelo Suliman
"A cultured man, Soliman was highly respected in the intellectual circles of Vienna and counted as a valued friend by Austrian Emperor Joseph II and Count Franz Moritz von Lacy. In 1783, he joined the Masonic lodge "True Harmony", whose membership included many of Vienna's influential artists and scholars of the time, among them the musicians Wolfgang Amadeus Mozart and Joseph Haydn"
Wikipedia.

Posted by A London Theatregoer at 14:30