Die Hauptstadt (Capital City), by Robert Menasse, 9* out of 10

With Die Hauptstadt, a novel about Brussels as the political and urban centre of the European Union, the award winning Viennese novelist Robert Menasse has written a melancholic, ironic, witty and suspenseful novel with Brussels and the European Commission at its centre.

Is there such a thing as identity? If so, does it have a geographic-political dimension, tying a person to a region, a nation, a cultural space? Do you have to be European to ask yourself these questions towards the end of the 2nd decade of the 21st century?

These thoughts came to my mind on reading the Viennese writer Robert Menasse’s long awaited novel Die Hauptstadt (Capital City). Long awaited, because his previous novel, Don Juan de la Mancha was published more than 10 years ago. Unfortunately, it has never been translated into English (only Spanish, Russian, French, Dutch, Norwegian, Bulgarian and Greek).  Long awaited also, because Menasse’s initial stay in Brussels and visit to the European Commission to research his new novel led to a much-noted essay published in 2012, in which the rather ironic and self-critical novelist showed himself as a passionate supporter of the European idea as conceived by its founding fathers, in particular, Jean Monnet and Walter Hallstein. Menasse also singled out the international civil servants working in Brussels for considerable praise, describing them as highly competent and intelligent and committed to the European idea. He identified and criticised the culprit for the lack of progress towards ever closer union in Europe as governments who put their nation’s perceived narrow interest ahead of that of Europe as a whole; the demon bedevilling Europe was Nationalism, the only real remedy, according to the activist pro-European Menasse was the abolition of the European nation-states resulting in a United States of Europe consisting of European regions rather than European nation states as its components. My thoughts on Menasse's activist Essay, Der Europäische Landbote (The European Courier), can be found by clicking here.

With Die Hauptstadt, a novel about Brussels as the current political and urban centre of Europe, the melancholic, ironic and witty novelist is back. Whatever one’s attitude to the European Union one can read this novel, be intelligently entertained and interpret it to support one’s point of view.

The protagonists of this satirical drama include an ageing Holocaust survivor from Brussels and a lobbying representative of the EPP. No, that is not Europeans People’s Party but its acronymic twin and nemesis, the European Pig Producers. Then there is the professor from Austria, with a father supportive of the Nazis in the 1940s, who has been invited to a meeting of a European think-tank. This turns out to be a highly predictable junket, for re-chewing stale European Union pragmatism instead of looking for bold new ideas. Then there is a whole menagerie of international civil servants working for the European Commission, whose national identities turn out to have multiple facets. They arrive to their work on their bicycles, financially incentivised by their employer to demonstrate ecological conscience and a healthier life style. Some work in the Directorate General (DG) for Culture, others in the DG for Trade and the DG for Agriculture. Into this mix comes a Polish assassin,  a Belgian police inspector and a peripatetic pig being sighted in Brussels at different times and places.

Out of all these characters and their interwoven lives, Menasse threads a satirical, dramatic and suspenseful novel. The organisational politics of the European Union and the personal and professional aspirations of its civil servants are seen in the alternating light emanating from Europe’s terrible 20th century history, her turbulent present and her uncertain future.

Book reviewers in German speaking/reading Europe see Die Hauptstadt as the first literary attempt at a novel of the European Union. In both Austria, Germany and Switzerland the novel has been rather well received. It has been put on the long-list for the most prestigious literary prizes in Germany and Austria (the equivalents of the Booker Prize in the United Kingdom).

With Brexit, the outcome of recent elections in France and Germany, President Macron’s ambitious plans for the Eurozone and bullish Catalonian regionalism it is for German readers an excellent literary accompaniment to the music of time. I warmly recommend it. The rights for UK and the Commonwealth  have been acquired by MacLehose Press, so the wait for the English Translation will hopefully not be long. 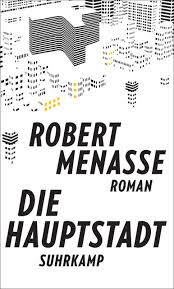 Editorial Note:I amended the original article on 9 November 2017, after Robert Menasse mentioned to me that the English translation he had chosen for the title of his novel was Capital City rather than the more ambiguous The Capital which I had originally used.

Posted by A London Theatregoer at 15:25