You Only Die Twice (Der Mann der zweimal starb), Documentary Film Austria/Israel/Germany 2018, by Yaïr Lev and David Deri 9* out of 10

You Only Die Twice is two thrilling documentaries rolled into one. There is the story of the search for the past itself and how it leads to unexpected human encounters and connections. And there is the story it reveals of people's actions in the most extreme situations showing prejudice, discretion, courage and the strength of some to swim against the strongest currents.

When Yaïr Lev’s mother, born and raised in Tel Aviv, Israel, hears that she has inherited a house in North London from a distant relative through who died without making a testament she is very happy because the money from its sale will come in very handy. She is the daughter of Ernst Beschinsky from Vienna who came to Israel (then the British Mandate of Palestine) in 1935. But then she hears that she may not be entitled to the inheritance, as another person called Ernst Beschinsky with the same birth details as her father seems to have lived and died in Austria. What starts as the attempt to secure his mother’s inheritance, turns into a detective story. After World War II, the second Ernst Beschinsky lived in the provincial Austrian town of Innsbruck in the Tyrol where over many years he was the president of its small Jewish community. Innsbruck was a hive of Catholic anti-Semitism from the Middle Ages and of support for Hitler’s National Socialist Party before and during World War II. So, the question of who was the second Ernst Beschinsky and what motivated him to take on the identity of another person, a Jewish person to boot, becomes an explosive one for the Jewish community of Innsbruck. When a close connection to a Tyrolean family of committed Nazis, members of SA and SS, of the first hour comes to light everyone is starting to fear the worst.

Yaïr Lev and David Deri's thrilling documentary, which deservedly won the Audience Award and the Research Award at DocAviv 2018, tells two stories for the price of one. There is the story of what happened to the “Innsbruck” Ernst Beschinsky between 1935 and his death in 1987 and there is the story of the search by Yaïr Lev which brings him in contact with descendants of the family of committed Nazis to which the Innsbruck-Beschinsky was connected. Outwardly calm, Yaïr Lev, inwardly emotional Lev gets to find out about and meet Austrians of different generations and makes an inner journey that reveals the chaos and complication of war and the struggle of how to deal with knowing the facts about one’s people’s past. Lev’s thorough research shows that even extreme situations can be very complicated, and exceptional people confronted with the need to help others in questions of life and death can act with amazing courage, whatever their background. And true love and real friendship are sometimes found in unexpected places.

You Only Die Twice is an excellent documentary that holds the audience’s attention from beginning to end, a kind of road-movie thriller about a man's journey to discover and decode a turbulent past.


German speakers with access to Austrian IP-addresses can watch it here on Flimmit.com against a small fee. 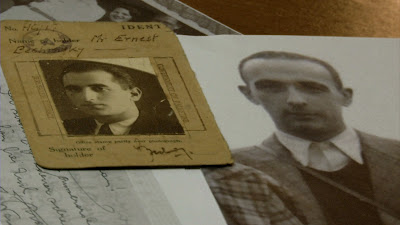 Posted by A London Theatregoer at 14:15