Weapon of Choice, Documentary Film Austria (2017), directed by Fritz Ofner and Eva Hausberger, 6.5* out of 10

Hampered in his investigation by potential and actual legal and political threats, film-makers Fritz Ofner and Eva Hausberger have still managed to create a thought-provoking documentary about Austria's high-impact contribution to Rap and Hip-Hop Culture. Whether it will also be allowed to provoke debate in Austrian mainstream media and society is an altogether different question.

Surrounding the decaying Jewish cemetery of Deutsch-Wagram, a small town close to the Vienna city limits are the buildings containing the original workshop of an inventor who is behind Austria’s most powerful contribution to rap and hip-hop culture.

His name is Gaston Glock. In 1981, without any previous experience in gun-design Mr. Glock invented a handgun with its steel barrel encased in a plastic-moulding, the Glock. His invention revolutionized the modern handgun. It also made Mr Glock a billionaire when his eponymous company and product conquered the US gun market in the 1990s. Its conquest began with the Glock becoming the weapon of choice for police forces throughout North America and continued with the Austrian gun reaching cult status among the members of inner-city gangs. As Glock rhymes with cock, and (sort of) with drop, cop, pop, shop and other useful everyday words in rap and hip-hop circles, Gaston Glock's second name became synonymous with “handgun” and mad its entry in hundreds of rap and hip-hop lyrics.

Fritz Ofner and Eva Hausberger's documentary "Weapon of Choice" concentrates on three sociopolitical arenas in which the use of the Glock has become widespread: suppliers of guns and services to supposedly law-abiding US gun lovers, who emerge as rather friendly and eloquent people, Chicago gangs, whose ex-members emerge as rather honest people about the high they got from shooting their Glock to kill, and the (civil) war in Iraq, whose shady gun traders were offering Fritz Ofner a share of their profits, if he could use his Austrian passport and connections to get them to become Glock-company-approved gun-traders; or if he could at least bring them a few Glock's on a future trip to Iraq from Austria. Apparently he said no to both propositions.

Ofner also interviews two former close business associates of the secretive and litigious inventor-businessman Gaston Glock. Both have spent significant periods in prison. One is the former CEO of Glock in the US. He chillingly explains how the first mass killing with a Glock in the eerily named town of Killeen, Texas turned out to be a major marketing plus for the company, that is now turning out more than 1.5 million guns a year in its Austrian factories, mainly for export world-wide. This export success ensures the philanthropist nonagenarian entrepreneur and inventor Gaston Glock and his company considerable protection and goodwill from Austrian politicians. The other interviewee and business associate of Glock, a jovial, money–laundering Falstaff-like figure from Luxembourg known as "Panama-Charley", is locked up in a Luxembourg prison for allegedly ordering the murder of Gaston Glock. This supposedly resulted in a failed attempt by a former French wrestling champion to kill Glock in a Luxembourg car park with an unusual “weapon of choice”, a plastic hammer for laying bathroom tiles. It does make one wonder whether there were no Glocks available in Luxemburg at the time.

Ofner and Hausberger's approach in their documentary is to let the viewer make up their own mind about the responsibility concerning of Glock the gun, Glock the company, Glock the man and the Austrian government who all benefit from the sales success of the gun. What responsibility, if any, do they have in misdeeds carried out with Glocks?  How should responsibility be allocated between incitement, shooter and gun? And what does that mean for those who produce, sell and facilitate the export of the gun into gangland and other warzones? And what about the good guys who defend themselves and law abiding citizens against violent crime, mass shootings and ideologically driven terrorism? Do they not need the best equipment to do their dangerous jobs?

In their documentary Fritz Ofner and Eva Hausberger never explicitly ask these questions, let alone answer them. They want the viewer to do the thinking. Moreover, it's not too difficult to work out where the filmmakers tend to on these questions.

As Austrian citizens and residents making this film in Austria, Fritz Ofner and Eva Hausberger have shown considerable courage and determination. The threat of Gaston Glock’s long reach and heavy hand exerted via powerful lawyers and other means was hanging over him during the six years it took to complete the documentary.

Perversely, the film can engender admiration for the Glock-gun and its inventor as much as disdain towards the role of this Austrian company in mass shootings, terrorist actions, and gang warfare. Ofner and Hausberger's attempt with this film to start a debate in Austria is courageous, but will most likely remain a flash in the pan.

Unsurprisingly, the legal and other worries in the 6 years it took to make this film and its non-campaigning approach have taken a toll on the end-product. Ofner's film is less hard-hitting, inquisitive and informative as a documentary than many viewers would have wished for. Nevertheless, “Weapon of Choice” is thought- provoking. Moreover, it is a worthwhile contribution to transparency and debate around gun culture, profits from weapons sales and the political protection for the benefit of potentially controversial companies in the land of Mozartkugeln, Sachertorte and the Sound of Music.

A mainly young audience packed the large Filmcasino cinema in Vienna at its premiere here and stayed on to listen intently to the understated and modest Fritz Ofner making his case for launching and inner-Austrian debate with his film. Clearly, he has found out a lot more about the subject than he could show on screen. 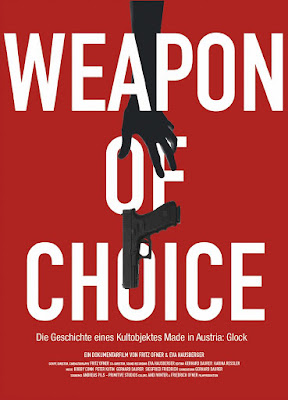 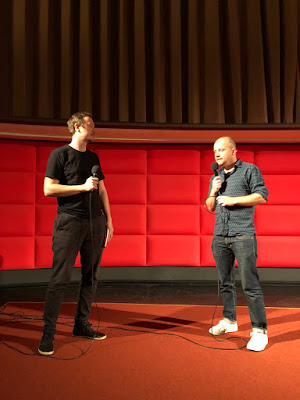 Posted by A London Theatregoer at 13:09