The Inheritance, play by Mathew Lopez, directed by Stephen Daldry, Noël Coward Theatre, London, 9* out of 10

Inspired by the English novelist E. M. Forster “Howards End”, Matthew Lopez' long but never dull play (2 times four hours) is a beautifully written piece full of quiet drama and subtle humour with engaging characters and plots; excellent performances by Kyle Soller, John Benjamin Hickey and a brilliant understated one by Paul Hilton.  Highly recommended for all who like the theatre.

New York City 2016. Eric Glass (Kyle Soller) lives with his boyfriend Toby Darling (Andrew Burnap) in the rent-protected apartment in New York which the family has inhabited since Eric’s grandmother moved in as a young woman and which Eric loves as a part of him. A cloud hangs over his future as the owners of the apartment have started proceedings to bring the tenancy under which he stays there to an end. Eric, modest and self-effacing, tries to live life with Toby and a group of friends all gay men, trying not to think about the changes that losing his beloved home will bring for him and his relationship with Toby. Toby who is outwardly fun, confident prone to outrageous behaviour likes to live day to day, enjoys the good life and contrary to the reliable and thoughtful Eric avoids introspection, thinking about his past and fears longer-term commitment. Eric and Toby also have two older friends a married gay couple, Henry Wilcox (John Benjamin Hickey) and his husband Walter. Henry is a real estate billionaire devoted to his business interest Walter his companion devoted to supporting him. Eric has visited Henry and Walter at the lovely country House in upstate New York not far from New York City.  When Henry and Walter move into an apartment in the same block as Eric and Henry is on a long business trip, Walter and Eric meet several times and develop a friendship based on mutual affection. Walter tells Eric about the support he gave to gay friends and strangers during the height of the deadliness of the AIDS epidemic in the 1980s and 1990s in his beloved house and garden in the countryside and the effect this had on his relationship with Henry. Eric tells Walter about his dream about a stable marriage and about his fears of losing his home. The short but intense period Eric and Walter and their very open communication about the important things in will in around about ways have far-reaching consequences. While they unfold, we follow several other plots concerning Eric, his boyfriend Toby who writes a play and their wannabe actor friend Adam (Samuel H. Levine) and others in their circle of gay young men-friends who are awaiting Hilary Clinton’s election as the first woman President of the United States with keen anticipation.

Inspired by the English novelist E. M. Forster “Howards End”, Matthew Lopez' long play (2 times four hours) is a beautifully written play full of quiet drama and subtle humour with engaging characters and plots as entertaining for straight men and women as for gay men who with very few exceptions make up all characters. For the audience, it feels like binge-watching an amazon prime or Netflix series where one cannot stop watching as one wants to know what happens to all the characters who have walked into one’s life. Apart from E. M. Forster whose spirit has a palpable presence I was reminded of the writing of Armistead Maupin in his “Tales of the City”. The 2 times 4 hours pass rather quickly as the writing, direction and beautiful ensemble acting, with excellent performances by Kyle Soller, John Benjamin Hickey and a brilliant understated one by Paul Hilton. And then there is Vanessa Redgrave with a poignant performance; she who played the character of Henry Wilcox’ wife Ruth in the 1992 Merchant Ivory film adaptation of “Howards End”.

Everything in the theatre starts with good storytelling and here the good story inspired by one of the great English writers of the 20th century E. M. Forster is beautifully extended adapted and written with rhythm, wit and feeling by a talented young playwright. Director and actors have excellent material to work with and they are doing an outstanding job. For anyone who likes straight plays (rather than musicals), this is one not only about being a gay man in New York but also about being a human being of any gender anytime anywhere. Highly recommended for theatregoers and E. M. Forster fans, The Inheritance Parts 1 and 2 having transferred from a successful run at the Young Vic are now booking in London’s Noël Coward Theatre until 19 January 2019. 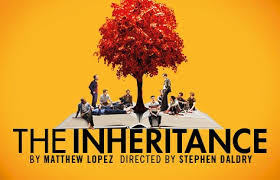 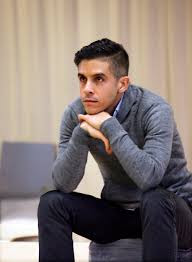 Posted by A London Theatregoer at 14:47