Matt Tyrnauer's film is an interesting record of an important cultural moment in time for New York, and indeed America. Studio 54, the club, was an integral part of a social revolution led by the rich and famous who reached out to the gay and black community to gay and black culture mainly for their entertainment. Tyrnauer’s documentary is a watchable and entertaining reminder of  30 months of abandon and bacchanalia New York City-style when Studio 54 shone ever so brightly. Above all, it is a testimony to an ingenious business couple who created an extraordinary theatrical and social experiment and paid a heavy price.

New York in 1977 was the sweet-spot in space and time when the trauma of the Vietnam War and the hippie love culture gave way to the desire for indulging oneself: partying, dancing, taking drugs, having sex and its feeling good. It was the time when money, celebrity, sex, drugs and disco music all seemed good and those indulging in it thought that there would be no price to pay. It was the time when the inclusion of gay lifestyle and black disco-rhythms provided heightened enjoyment for the privileged people in the fashion, entertainment industries and when art meant pop-art. Studio 54 was the place in New York which perfectly enacted this.

In his documentary about the iconic club, Matt Tyrnauer looks at the two people who created and ran it on Manhattan’s West Side 54th Street and 8th Avenue, a sleazy area in a city plagued by street-crime. Two Brooklyn kids with big dreams of success New York style, Ian Shrager and Steve Rubell were the perfect business couple to fall upon the most outrageous right idea at the right time.

Matt Tyrnauer’s film is mostly about these two people, who complemented each other perfectly. It shows how their outrageous business plan, became reality in a disused television studio come theatre and achieved immediate success.

Studio54 was more like a crazy Broadway show, with the audience being the cast than a night club. The show began with the long queue of people wanting to gain entry and the triage at the door.

The outward star of the documentary is the extrovert Steve Rubell. But the more interesting character is Ian Shrager, son of Max Shrager, a Jewish Toni Soprano also known as "Max the Jew". Ian, a lawyer and businessman, whose roguish charm and raspy voice reminds one of Robert de Niro’s best comedy-drama performances.  Ian Shrager is a serious and engaging character. Answering Tyrnauer's questions, he charts the meteoric rise and hard descent of the Shrager-Rubell partnership. He recalls the frantically energised Studio 54 fantasy-world, and the business-couple's downfall followed by the (by New York City standards) slow rise from the ashes. A rise that was punctuated by tragedy and shared with many who were all totally unprepared for the impending doom of the HIV-AIDS epidemic.

Matt Tyrnauer's documentary captures a brief an important period in the cultural history of New York. Studio 54 was an integral part of a social revolution led by the rich and famous who reached out to the gay and black community to gay and black culture, mainly for their own entertainment. And it looked for a moment like the rest of the world did not have to be considered. The arc of history would run not towards ever more divided identity-thinking but towards the late Martin Luther King’s ideal, a world where we would all recognize our commonality as human beings and our separate “identities” would be secondary.

That was the feeling on the dance floor of Studio 54, where we see images Liza Minelli and Andy Warhol. We see a shy Michael Jackson dropping in on Steve Rubell. Caught unprepared, he genuinely gives his full endorsement to Rubell and Shrager’s creation. Nile Rogers of Le Freak C’est Chic reflects on what Studio 54 meant for the social and musical scene of the late 1970s, and he can't help smiling as he remembers.

Tyrnauer’s documentary is a watchable and entertaining reminder of a unique short moment of abandon and bacchanalia 1970-New- York-City-style shining ever so brightly for a brief moment in time. Recommended for everyone interested in 1970s New York. 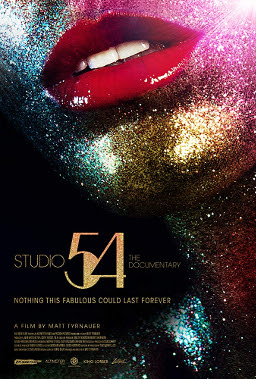 The text of the original blog-post has been edited and corrected to eliminate some of the grammatical errors and repetitive phrasing in the early version.

Posted by A London Theatregoer at 13:08