93Queen is a thrilling documentary about the fine political struggle by Rachel "Ruchie" Freier, for women’s empowerment in the Jewish Hassidic community Borough Park New York City. It is a struggle for change from within for achieving acceptance in an environment which is particularly resistant for reasons of religion and tradition. Ruchie Freier is a great protagonist and Paula Eiselt a talented filmmaker. You don't have to be Jewish to enjoy this film. Highly Recommended.

Rachel “Ruchie” Freier is a mother of 6, living with her husband in the Haredi Hassidic community and neighbourhood of Borough Park Brooklyn. Ruchie is also an Attorney-at-Law who believes in women’s empowerment. With revolutionary ideas, she wants to change her community within in an evolutionary way within the boundaries of its rabbinic laws.

Ruchie has two ambitions for herself: to become a judge in Crown Heights and to set up and lead a Non-Governmental Organisation of volunteers, Ezros Noshim, which is an ambulance service by women for women in her community. When all her approaches to do this in cooperation with the existing highly successful all-male Hatzoloh Hassidic ambulance service are rebuffed, she decides to proceed against the resistance of many in her community.

Ruchie wants to implement her ideas on her own terms and that means to set up and all female ambulance service by women for women while keeping to all the religious standards and most of the customs in her community where all the responsibility for housework and bringing up small children fall on the woman. And indeed, all her husband seems to offer is smiling moral support.

Rather than wanting to have it all, Ruchie Freier wants to do it all to a very high standard. Paula Eiselt follows Ruchie and her merry band of women as they attempt to set up their all-women ambulance service against strong resistance from their ultraconservative community and the often underhand and sometimes nasty attempts by the mighty male Hatzoloh organisation to prevent their female competition from coming into being.

Ruchie Freier turns out to be tenacious and tough as well as a gifted politician with a will to power. She is ready to fight and capable of being ruthless to succeed. Ruchie’s route to women’s empowerment is the feminism that dare not speak its name. Will she succeed and what price will she have to pay for her attempt to bring change the Hassidic Community of Borough Park?

With great content and a great protagonist, director Paula Eiselt has hit upon an excellent subject for her award-winning first documentary. She succeeds in capturing the character of the ambitious and politically astute “Ruchie” Freier. Ruchie and her band of merry married women from Borough Park do not want to transgress the religious boundaries of their Haredi Hassidic community. They crave endorsement of their project by its all-male Rabbinic leaders. Above all, as they constantly explore the limits of what is possible for them, against strong resistance from the Hatzoloh organisation and the ultraconservative forces within their community, they need help and support from outside to realize their dream. These outside encounters are little jewels attentively captured by Paula Eiselt, a graduate of the prestigious New York University Tisch film-school. One of them is with a black paramedic trainer, who expresses his empathy and advice. His father told him that as a black man he had to work twice as hard and be twice as good as white men to succeed. He encourages the Hassidic women whom he admires and tells them that the same is true for them. Then, there is the black lady trainer who explains the different rhythms of heart massage: one as a waltz, one as a tango and she dances both, as her keen students of “Ezros Noshim” look on in wonder.

Another special moment is provided by the young Haredi woman, who at 30, believes herself beyond the age where she has any hope of finding a husband in her Hassidic community. Being unmarried, she won’t be allowed to join the frontline of “Ezros Noshim” volunteers. Miraculously, in her view, she finds a husband. What’s more she can hardly believe that her future husband gets all her geeky Star-Wars and Lord of the Rings references because he also secretly and disobeying his community’s censorship, watched the movies and read the books next to his Talmudic studies.

The music by Laura Karpman with vocalist Perle Wolfe cofounder of the girl-group Bulletproof Stockings provides a special touch; Perle Wolfe, who grew up in a Hassidic family herself, gives a re-interpretation of the biblical "Eshes Chayil" (Proverbs 31:10): Who can find a woman of valour? Filmmaker Paula Eiselt, may be one herself and so is her protagonist Ruchie Freier and quite of few others shown in this delightful documentary. 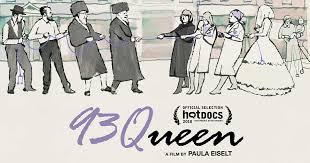 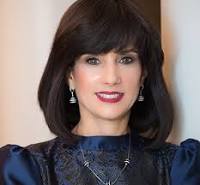 Posted by A London Theatregoer at 14:43