Ryan White’s documentary on the life and times of 92-year-old bundle of positive energy and fine humour, the celebrity media personality and sex-therapist Ruth Westheimer, an orphan of the holocaust, speaks to the human being in all of us. Don’t miss it.

At 92 years of age and 146cm tall Ruth Westheimer, Ph.D. is larger than life. Her smile is irresistible, her energy irrepressible, her charm inescapable, her sharp brain unimpeachable.
“Ask Dr. Ruth” the title of this documentary about the life and times of Ruth Westheimer, was also the name of the radio programme about sex, emotions, and relationships which became a surprise blockbuster success in the New York of the early 1980s. It laid the foundation for her national and later worldwide celebrity status. Ruth Westheimer was in her mid-forties working as an academically qualified sex therapist and post-Doctorate researcher, having recently obtained a Ph.D. in psychology. With great empathy and down-to-earth common-sense, she answered listener’s questions about sex while breaking many taboos about the use of explicit language describing sexual acts and caresses. The German accent from the Frankfurt-am-Main region of the State of Hesse became her trademark. The indefatigable human energy, evident since early childhood, persists until today. At the age of 92 she works as a lecturer, speaker, author, television personality; her memory of names and events is clear and her step is quick as she tackles every busy day while making time for meaningful interactions with close family and friends. She seems to pass on some of this energy to friends and lovers who in their 80s and 90s recall the younger Ruth when she was still Carola Siegel.

Director Ryan White has persuaded Dr. Ruth to be the subject of his feature-length documentary which delves into Ruth Westheimer’s 90 or so years of a life intensely lived. He shows that what is seen by the public is only the already impressive tip of an impressively massive iceberg of her life-experience and educational attainments. Westheimer’s life is a story full of creative responses to the enormous challenges and tragedies with which Ruth Westheimer was confronted from the age of 10, when her German compatriots under the leadership of Adolf Hitler and the institutions of his National Socialist German Workers Party (NSDAP) turned on the Jews in their country and the world with murderous intent. Ruth Westheimer credits her resilience to a wonderful childhood gifted to her by her parents and her grandmother up to the age of 10 where a belief in the paramount importance of learning and education was an essential part of the family values which were passed on to her in a loving atmosphere.

When she was 10 years old her parents decided to send her with other Jewish children to Switzerland, where she spent World War II in a Swiss orphanage. The Jewish kids were treated as second class orphans who had to clean and work for the Swiss orphans to earn their keep. Having spent all the war-years in Switzerland, she does not see herself as a Holocaust-Survivor, but as a Holocaust-orphan: none of Ruth Westheimer’s close family survived the systematic murder of the Jews by the Germans under their Nazi-leadership. The documentary, sometimes effectively using beautiful animation, is also a document of important events of 20th-century Western history, taking us with Dr. Ruth, to Palestine-Israel, Paris and New York.

Ryan White and his team have done a great job capturing many facets of Ruth Westheimer’s personality by following her through a busy year or two and by allowing us to see her through the eyes of other people who know her well, both young and old. Being friends with Dr. Ruth from her childhood onwards seems to give people of all ages access to the secret of a kind of inner optimism and prolonged youth – many of her friends are in their late eighties and truly young at heart.

Watching Ryan White and his crew try to keep up with the whirlwind that is Ruth Westheimer is an unmissable feast of joy and tragedy, drama and resilience, a triumph of profound humanity over unmitigated evil. She is a true hero of our time and a shining example to young and old. Westheimer’s is a life lived with passion and persistence, with bright intelligence, optimism, and love in the face of enormous obstacles.

“Ask Dr. Ruth” is superb entertainment, as well as an intelligent practical statement about women’s self-empowerment, the Holocaust, sex and emotions, Israeli and US history rolled into an exciting and heart-warming package that strengthens our faith in the strength of the human spirit. In short, it’s the essential Dr. Ruth who speaks to the human being in all of us. A tour de force not to be missed. 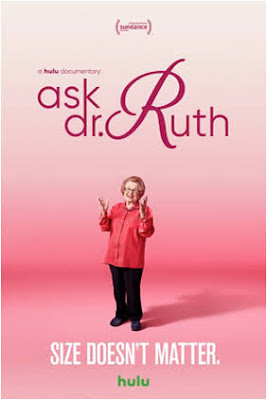 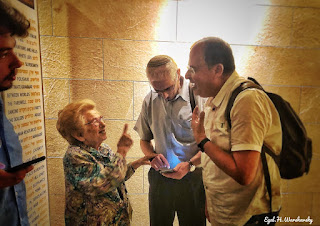