Come from Away, Musical, written by David Hein and Irene Sankoff, Phoenix Theatre London, 8* out of 10

Built on true Canadian hospitality, politeness and a bit of pathos, Come from Away's originality in taking an unlikely subject as the basis for a  musical ultimately succeeds with audiences in its feel-good mission and has an Olivier Award to show for it.

In the episodic rivulets flowing from the stormy seas of world history, interesting stories can be found which are waiting to be told. On 11 September 2011 thousands of people descended upon Gander, a small town with an enormous airport in Canada’s province of Newfoundland to commemorate the days they spent there 10 years earlier when the run of history was administered a violent jolt by the murderous attack of Al-Qaida, a violent Islamist organisation, on New York City and Washington DC.

In the wake of the airplane hijackings and attacks on the twin- towers, all US airspace was closed for several days. The planes that were in the air expecting to enter the United States when the relevant authorities took this decision had to land wherever possible outside the USA. Gander had a giant airport, because in the era before passenger planes had jet engines all flights from Europe to the US had to refuel there. In 2001 plans to close the little-used airfield of Gander had been made but not yet implemented. And so, 38 airplanes and 6500 passengers were diverted to this sleepy town.

Come from Away is a musical-treatment of the events at Gander where the 7000- inhabitant town of Gander and surrounding villages stood up to the challenge of welcoming 6500 unexpected and upset airline passengers and crew from all over the world. A random cosmopolitan crowd quite literally if gently falling from the skies into a very quiet, somewhat backwoods region. Come from Away shows us how the local community pulled together to give them a home from away and how some of the random encounters played out.

Based on in-depth interviews the musical written by David Hein and Irene Sankoff this is a charming, feel-good musical with fair attempts at moving moments about airplane passengers and crews in temporary distress. They were helped by the Newfoundlanders of Gander and surrounding towns in a necessarily improvised but heart-warmingly cordial manner with no expectation of any payment in return.

What makes the production work is above all the lively ensemble performance, with actors slipping into different roles as needed, the on-stage musical accompaniment, direction by Christopher Ashley, scenic design (Beowulf Boritt)  as well as the lighting design (Howell Binkley) which transforms the stage space instantly into into school halls, outside scenery and aircraft cabins as needed. The music is very pleasant too.

All this makes Come from Away a very enjoyable watchable and original show for those of us in the West who like to be helpful to strangers and for cosmopolitans who often take airplanes for jobs and holidays.

What the story does not have is conflict or real tension between its protagonists, although, or perhaps because, the murderous conflict of which the 9/11 attack is a part plays a significant role in the background: it is, of course, our own view of western civilization as a friendly and cosmopolitan good that is being celebrated in this musical, and the other side of the coin, western civilization being seen as unfriendly and violent to non-westerners is only hinted at. Similarly, the potential conflict between gay city dwellers and manly Newfoundland lumberjacks is also resolved in polite and down to earth Canadian tolerance which although it sometimes skips the province of Quebec, apparently reaches all the way to Newfoundland. There is no black-face future Canadian prime minister anywhere to be seen either. Also, in the era of Greta Thunberg’s admonitions to us all on the evils of air-travel for our environment, any story which has only positive things to say about airline pilots and frequent fliers and the kind earthlings whose beautiful environment they gradually destroy may leave some of us feeling slightly queasy.

If such potential reservations do not put you off, then you are likely to enjoy this enthusiastically performed and similarly received award-winning musical as much as the audiences who love it. Moreover, Come from Away is also the proud recipient of a 2019 Olivier Award for best direction of a musical. 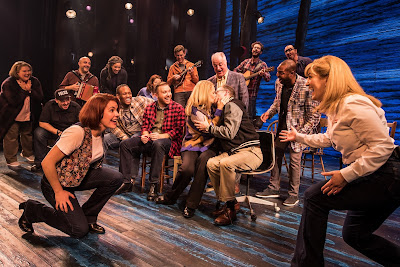 Come from Away in happy action

Posted by A London Theatregoer at 14:17