Marianne and Leonard: Words of Love, Documentary Film UK 2019, written and directed by Nick Broomfield, 8.5 out of 10

Supported by interesting and rarely seen archive material, filmmaker Nick Broomfield takes a sympathetic but not uncritical look at Marianne and Leonard’s lifelong love-story. New interviews Broomfield has made with contemporary friends of both are illuminating not only about the relationship but also in capturing the Zeitgeist of the sixties cultural avant-garde and their hangers-on. Not much music or poetry but an insightful and entertaining look at one aspect of the social history of the 1960/70 generation of English-speaking singers and poets.

The beautiful blond Marianne Ihlen from Norway joined the Hydra community in the early sixties as the wife of an increasingly abusive Norwegian writer. When the dark and attractive unknown Canadian author-to-be Leonard Cohen turns up on Hydra, he and Marianne who has a young child from her marriage, develop a strong emotional and sensual bond that, against all odds, will last a lifetime. This, of course, does not stop either of them from enjoying friendships with sexual benefits with other people they find attractive.

Supported by interesting and rarely seen archive material, filmmaker Nick Broomfield takes a sympathetic but not uncritical look at Marianne and Leonard’s lifelong love-story. Broomfield was himself a friend and therefore naturally also a sexual partner of Marianne. His special angle is to concentrate not so much on Leonard Cohen but give Marianne a lot of room in the story. Both Marianne and Leonard are now dead, but luckily there is archive material about life on Hydra and audiotapes on which Marianne speaks about her relationship with Leonard Cohen and more. And the new interviews Broomfield has made with contemporary friends of both are illuminating not only about the relationship but also in capturing the Zeitgeist of the sixties cultural avant-garde and their hangers-on. This is most accurately and entertainingly expressed in the interview of Aviva Layton the then-wife of Cohen’s poet friend Irving Layton.

The truth is that the sexual freedom the contraceptive pill opened-up did not change the power relations between men and women. The main beneficiaries of that sexual revolution seemed to be men, the main victims of the perceived total freedom and its corollary of antiauthoritarian education were children, even when due to the miracles of “the pill” children were now wanted and the timing of their arrival could to some extent be scheduled.

Leonard Cohen, handsomely dark, talented and good-looking, with more than a touch of melancholia, became the heartthrob of intelligent, today one would say, sapiosexual women, that is women who find intelligence sexually attractive or arousing. Luckily, for him, in today’s hindsight, he did not attract and was not much interested in the youngest of groupies, but in more mature women between 25 and 45, including Marianne and Janis Joplin and countless others. Many women came on to him, at least one on camera with her boyfriend standing next to her listening in.


Cohen’s redeeming features are numerous: he was highly intelligent, self-aware, had a sense of humour, an instinctive and lasting moral compass and a brain that was surprisingly resistant up to his death in old age to long term excessive use of Lysergic acid diethylamide (LSD).

Broomfield’s film is interesting for the archive materials and the interviews which tell a rich picture of part of a generation that enjoyed its newfound freedom, was peaceful and full of good intention, and whose selfishness was cloaked in a many-coloured coat of love, sex, poetry, and song.

There are hardly any musical numbers by Leonard Cohen to be heard, but this is an engaging, captivating portrait of the enduring relationship between a man and a woman in an era that was not conducive to enduring relationships. The fact that this relationship favoured Leonard Cohen, who with hindsight put himself first always while behaving more responsibly toward Marianne and her son than most males would have, does not detract from the fact that Marianne as his muse, managed in her own way to be the captain of her soul. Her son, like so many children who grew up on the pseudo-idyllic island of Hydra, was not so lucky.

Do not expect a celebration of Leonard Cohen the poet and singer. Marianne and Leonard: Words of Love is the successful presentation of the social context of Cohen’s life and times; as such one does not have to be a fan of Leonard Cohen to enjoy this entertaining and insightful look at a piece of social history from the last third of the 20th century. Entertaining and insightful with some funny and moving moments. 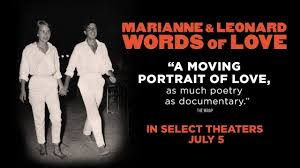 Posted by A London Theatregoer at 14:06