Cave of Forgotten Dreams, directed by Werner Herzog, Documentary Film, 4.5* out of 5

The subject of this documentary is the Chauvet Cave in the Ardèche region of France. The cave is named after one of the speleologists who discovered it in 1995. It is closed to the public. The reason for this is to protect its contents, the remnants of animals and the artefacts of humans who lived about 35000 and 25000 years ago. Of these remnants none are more marvellous than the cave paintings.


In order to make this film, Werner Herzog and his team received unprecedented access to the caves and to the multidisciplinary team of researchers who are only too aware of their luck and privilege to be allowed to work on this unique treasure trove of art, archaeology and more. The film is presented in 3D. It shows us the cave and its setting with a plasticity that helps the viewer experience a unique insight into mankind's very distant past.


What makes this film great is its subject. The documentary-maker and the filming does not get in its way. On the contrary, he manages to present it and the professional and personal thoughts of the scientists working in the cave in a very straightforward manner. What makes this film deeply moving and gives it a long after burn effect is seeing the paintings of the animals and of the one human being depicted in the cave. Even if, like me, one has only a very rudimentary understanding of painting, sculpture and art history, seeing these cave paintings touches one deeply. Looking at the horses, bison, rhinoceroses drawn by human beings about 35000 and 25000 years ago, I had to revise my idea that humans then were primitive. The paintings reminded me of drawings I had seen by Pablo Picasso and Marc Chagall in the 20th century. Yet, human beings living tens of thousands of years ago as hunter gatherers were capable of producing cultural artefacts with apparently the same sensitivity and degree of imagination. These people in their thinking and looking at the world were clearly much closer to us in their complexity and creativity than I had thought.


The only weakness of this film is a superfluous preaching epilogue that spoils the last 5 minutes. The strength of Herzog's film is that it unearths interesting facts, gives us context and emotion and beautiful pictures of a unique subject full of beauty and humanity. See this film – its beautiful and haunting images will stay with you.
http://www.imdb.com/title/tt1664894/ 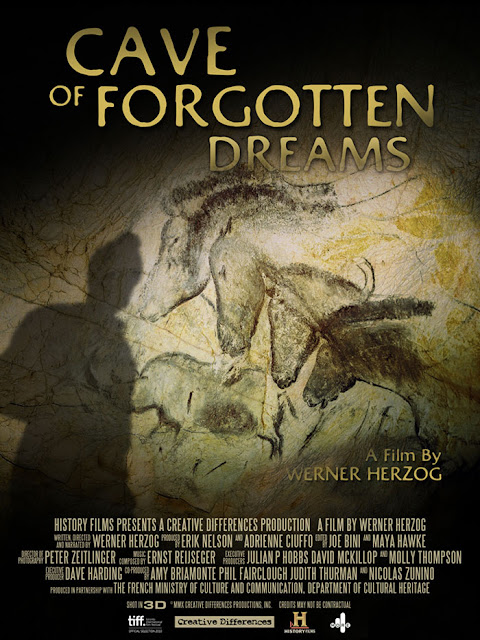 Posted by A London Theatregoer at 13:51