Is 3D Film Making Here to Stay this Time?

Werner Herzog made his beautiful and moving documentary film The Cave of Forgotten Dreams in 3D. A reader of my blog entry on the film left the following comment: “I'd be interested in your view of 3D. Is it a fad or is it here to stay?”
Predictions are always difficult to make, particularly when they are about the future. Nevertheless, this blog entry is my attempt at answering the question.
Cave of Forgotten Dreams would have been just as moving and powerful in 2 dimensions as it was in 3. 3D did not distract me, or enter my conscious awareness while I was watching the film, despite having to wear heavy tinted 3D viewing glasses.
Powerful digital infrastructures are rapidly becoming ubiquitous in urban agglomerations worldwide. Consumers can acquire equipment that allows them to tap into these infrastructures for a wealth of creative applications including entertainment. Therefore 3D is most likely here to stay this time around. Means of delivery and production of 3D films will probably develop rapidly. Once the need for wearing weird uncomfortable tinted glasses is overcome, 3D will gradually become the preferred method for presenting top of the line visual entertainment. This development is similar to the move from black and white to colour in the film-industry of the late 1940s, after Selznick's production of Gone With the Wind.
Is that a good thing?
While embracing this and other advances in technology with enthusiasm, I will miss the 2D film world. But then, I also still love the power of expression and emotion of black and white in film and still-photography; and even the unique dramatic effects of silent films like Fritz Lang's Metropolis , Sergej Eisenstein's Battleship Potemkin and Chaplin's masterpieces of the silent era.
Is it not exactly the struggle of great creative minds with the restrictions or conventional rules of the medium they use for expression that renders the most wonderful and lasting works of art? I believe it is, but every new technology has its new limits and restrictions and the world is full of creative people, so most probably we need not worry. Let us just hope that new technologies will stay around long enough to allow talented film-makers the time to become bored and frustrated with their limitations. That way they'll have to come up with creative artistic ways to overcome them. 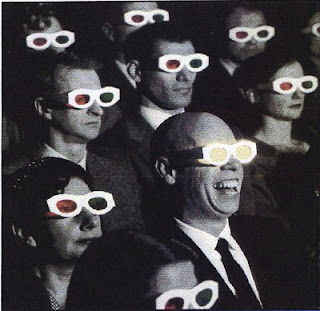 Posted by A London Theatregoer at 23:51