The Drawer Boy, play written by Michael Healey, directed by Eleanor Rhode at the Finborough Theatre, London, 8* out of 10

The year is 1970. Morgan and Angus, two men in their fifties, run a small arm in Ontario not far from Toronto. Miles, a young man from an actors cooperative arrives at the farm. Miles belongs to an idealistic group of Toronto theatre people who are jointly developing and putting on shows for the local farming communities. He wants to work and observe life at a farm as research for his theatre group's show.

Morgan somewhat reluctantly allows him to stay. He begins to enjoy having Miles around and making fun of the serious young man. Miles finds out that Angus has headaches and severe difficulties due to loss of his long term and short term memory; Angus is very good at arithmetic and remembering numbers, though.

As Miles becomes interested in the biography of the Angus and Morgan and the story of their friendship, he awakens demons of the past with serious consequences.

Michael Healey's The Drawer Boy is an intelligent and witty drama about the tensions between city and country people, between down to earth farmers and idealistic artists. The play also explores the nature of friendship, the importance of the stories we tell about ourselves to maintaining our identity and sanity – and the place of truth in all that. Healey skilfully captures the ubiquitous earthy Canadian sense of humour and understatement in his dialogues. The willingness of different parts of Canadian society to engage with each other and stay engaged through conflicts and difficulties is remarkable. Though one wonders whether it is still present in today's more consumerist and less idealistic era.

The Farm Shows of the 1970s, when idealistic theatre people went into the Ontario farming communities to learn about them and develop plays for and about them, are a genuine part of the history of the Canadian theatre. Healey captures that history in this play which was first written and performed in Toronto in 1999. The Finborough, one of the best London Fringe theatres, gives this play its well deserved and long overdue London première.

Making effective use of sound and lighting director Eleanor Rhode ensures that the story holds the audience's attention from beginning to end. A strong Canadian acting ensemble help her to bring the story to life, with outstanding performances by John Bett (Angus) and Neil McCaul (Morgan).

A great outing to the theatre; even a matinee on a hot Summer day is a pleasant experience here: the Finborough Theatre is air conditioned and the Finborough Café a friendly place serving good wines and a mean cup of coffee just when you need it. 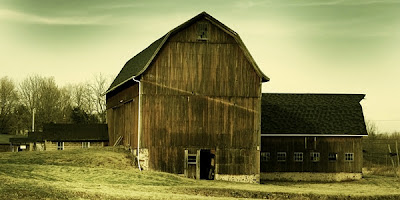 Posted by A London Theatregoer at 01:15