"The (Honest) Truth About Dishonesty - How We Lie to Others and Especially Ourselves", Book by D. Ariely, 8* out of 10


There is now in the Western World a general bemoaning of greed in the Financial Services Industry. A lot of blame is being put on institutional and cultural factors. In a recent leader The Economist, a voice of free market capitalist reason, states: "culture flows from structure".  It does, but not exclusively. Culture also flows from predispositions inherent in each and everyone of us.


Mr Diamond explained that there were at Barclays only 14 employees greedily acting with no thought for anyone but themselves. Somehow they did not "love" Barclays quite as passionately and selflessly as their former leader. Their behaviour said Diamond had nothing to do with Barclays culture. Somewhat bizarrely he added that some of these people had been at Barclays for 25 years.  To have kept themselves aloof from Barclays' culture, while working for the organisation for 25 years, shows remarkable resistance to the founding Quaker-values of their employer.


The story of the rogue 14 among the overwhelmingly wonderful 114,000, is however only one possible version of what might have happened. It is of course the one that suits Barclays and Mr. Diamond best.


What though, if the traders concerned were not especially greedy and selfish criminals, but good people like you (and I)? Could this be conceivable?


It could. The following scenario came to my mind after reading bestselling author and social psychologist Professor Dan Ariely's  new book "The Honest Truth About Dishonesty - How We Lie to Everyone - Especially Ourselves".


You are a LIBOR rate-reporter in Barclays dealing room. Your colleague, the money market trader, asks you to use your discretion and power in setting the LIBOR  by raising or lowering it a few hundredth of a percentage-point from what you originally might have had in mind. Framed this way, you don't have to think think about the few 100 Million US Dollars this might add to his profits at the detriment of some other trader at another bank. And anyway, if the banks of the other traders with the opposite position to that of your bank's are regularly doing this too, you are redressing the balance. Isn't that only fair? You also know that tweaking rates is not designated a criminal offence in the relevant regulations; why would that be, you ask yourself, if not to signal that it is in a "grey-zone"? You can help your dealer-friends make more money for Barclays Bank, an organisation you  "love" just as much as your boss,  Mr. Diamond.  As a result of what you do, Barclay's shareholders get better returns, your dealer friends and your bosses get bigger bonuses.


You are not acting selfishly or greedily since as rate setter you do not get any financial gain for yourself, just the gratitude of those who know that you helped them. Sure, you might even get a bottle of Bollinger-Champagne now and then when you help an ex-colleague who now works at another Bank. What makes this deed even more acceptable in your mind is the fact that you do not know whether tweaking your LIBOR submission  will actually influence the final rate. After all the highest and the lowest submissions by all banks who submit them will be excluded from the LIBOR rate calculations. So, in effect, perhaps you actually changed nothing - and who is to tell whether even without intervention from your dealer friends you might not have given a slightly lower or higher rate anyway? After all, rate setting is more of an art than a science, is it not? Otherwise, why would it need human intervention at all? Could it not be automatically calculated based on actual transactions? As to the ordinary people out there affected by LIBOR, if you made the rate go up slightly you were if anything helping all prudent people and pensioners with their savings. If you made the rate go down slightly, you were if anything helping people who have borrowed money by taking out mortgages and loans.


"Altruistic cheating", Ariely tells us, is a surprisingly widespread phenomenon, because we all like to feel good about ourselves and gain gratitude and social recognition even from those we may only know casually. Of course, altruistic cheating can be just as harmful to trust and confidence as the purely selfish kind - and just as criminal.


Ariely's book is a timely contribution to explaining the psychological factors both favouring and disfavouring dishonesty and corruption. We ignore these factors at our peril. One of the remarkable findings from the experimental approach taken by Ariely and his colleagues is that money and materialistic greed are often not the most important drivers of dishonesty. Moreover, even where they are, our "cognitive flexibility" and creativity allows us to convince ourselves that we are not actually being unacceptably dishonest or corrupt, as long as we do not overstep a line that we all draw, fudge and maintain in our mind. That line does move. In some cases this tendency will go so far that something we initially were aware of as being a lie, when repeated by us over the years and believed by others becomes a truth even to ourselves. This for instance happens not infrequently when people have successfully lied on their CV about the qualifications they have attained. As they repeat the lie they can end up believing it. Another surprising finding that Ariely speaks about as he describes his experiments is that group-working can actually favour dishonesty and corruption, particularly when the people in the group get on very well with each other.


On the plus side, experiments show that timely moral reminders, whether of a religious or secular nature, reduce our propensity to cheat. A group of students (some religious, some atheist) who were given the 10 commandments to read before doing an exam took much less advantage of opportunities to cheat  than the control group which had not been given any moralistic text to read. The opportunity to "confess" again in a religious and not religious context, also helped people to find the way back to the straight and narrow, once they had slid down a slippery slope of increasing levels of cheating. Where this opportunity what not given the "what-the-hell-effect" set in and offences increased in frequency and seriousness. Form design can make a big difference: people asked to sign that they will not cheat before filling in a form (tax form or insurance claim for example) are more likely to fill it out honestly, than people signing the form after they have filled it in. As one would expect, seeing other people cheat when they have the opportunity to do so does have an infectious negative effect. Being controled by a person one does not know at all does have a strong deterrent effect.


The model that Ariely thinks best describes how you and I deal with cheating and lying is that we all like to benefit from dishonesty, but only to the extent that we can look ourselves in the mirror and think that we are OK.  So most of us apply our creativity and cognitive flexibility to navigate the grey zone between these two desires.


More research is no doubt needed to confirm and expand on the various hypotheses and theories relating to how people who consider themselves honest manage to justify a certain degree cheating and lying.


Ariely has written a thoughtful, entertaining and very readable book which can surely add much needed insight to hotly debated and polarising topics.  As a consultant to the UK Treasury's Behavioural Economics Unit, his ideas may find their way into UK Government policy. Not a bad thing that would be, too.


The (Honest) Truth About Dishonesty: How We Lie to Everyone - Especially Ourselves by Dan Ariely, Harper Collins, 2012 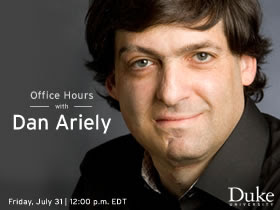 Posted by A London Theatregoer at 23:29