The play Red Velvet finished its run at the Tricycle several weeks back. Yet it has been on my mind since. It is based on a true story, the life of one of the most celebrated Shakespearean actors of the early 19th century.

As he is getting ready for a performance of King Lear in the Polish city of Lodz in August 1867, the celebrated Shakespearean actor Ira Aldridge is beseeched by a young Polish woman journalist to grant her an interview about his life.  He reluctantly agrees and reminisces about his debut as Othello on the London stage.

In 1826 a French theatre director in London has a bold plan. When the famous actor Edmund Kean falls ill during the rehearsals for Shakespeare's play Othello - The Moor of Venice: he replaces Kean with an American actor. This actor is Ira Aldridge.  Aldridge is not only American,  he is also black.

With some persuasion, the other actors are made to accept the choice, except for Edmund Keane's talentless nephew who had expected to inherit the role of Othello by virtue of his family relations. Desdemona will be played by Ellen Tree, soon to become one of the the greatest actresses on the English stage.

Aldridge uses his chance to influence the production. Rather than the formal manner of playing Shakespeare, he pleads for a more naturalistic and dramatic approach to the plays staging and acting. Othello and Desdemona should face each other during dialogues, rather than follow the convention of standing and declaiming facing the audience. More daring yet, they should touch during passionate dialogues. When Othello kills Desdemona in a jealous rage his hand will be at her throat and shake her back and forth. The realistic depiction of a black man killing a white woman in a jealous fit of rage was new and daring and sure to incite reaction in 1820s London.

For the first Othello played by a black man the Vaudeville theatre is sold out. London theatre audiences enjoy being shocked and titillated by the novelty of a black actor touching a white English leading lady in the service of art. After opening night, theatre critics of the Spectator and other papers explain why a black actor cannot play Shakespeare: it's the remoteness from the English bards sensibilities and physical factors such as the thick lips that preclude a black actor from succeeding in a Shakespeare role some critics find. But audiences are moved and entertained by the sensational performance of Aldridge and Ellen Tree.

After three days of packed performances, the trustees of the theatre lose their courage. Afraid of scandal, they close the show. Ira Aldridge's short dream of a brilliant career in the London theatre is shattered. Yet he does not disappear into obscurity. While he never returns to the London stage, he becomes a celebrated Shakespearean actor on the European continent traveling for many years to great acclaim between Berlin and St. Petersburg. Not only his Othello is a sensation; with the right makeup he becomes a white King Lear and leaves his mark as the first black actor of note in Europe.

Red Velvet was  the first production by the new Artistic director of the Tricycle, Indhu Rubasingham, and it bodes well for the future of this important London theatre under her leadership. The production was sure footed putting the telling of a unique and unusual story, relevant beyond the world of theatre at its centre. Acting performances were all of high quality. David Lester gave a convincing performance of  outstanding quality in his portrayal of Ira Aldridge.  His transformation on stage into King Lear was a poignant and moving moment of this play.

Almost 200 years after Aldridge’s début as Othello on the London stage, how much progress have we made in allowing talent to overcome prejudice? How many famous black actors are there on the English stage? Not enough.  How many black people in positions of leadership in the UK? Not enough. As in Ira Aldridge’s time, America with all its faults, still leads the way, most recently with re-electing its first black President.

As to Berlin, its is a sadder story still. The German premiere of Bruce Norris’ witty play about race in the America of 1950’s and now,  Clybourne Park, was to take place there last summer. (You can find my review of its UK première of Clybourne Park here.)  When the author heard that all the black characters were to be played by white actresses in make-up he withdrew his permission for the planned Berlin production to have the play performed. The German theatre world and the German media were genuinely surprised by the authors objections. Clearly in 2012 it had not occurred to the theatre-makers in Berlin to consider casting a black character with a black actress, rather than a painted white one. This summer, Ira Aldridge was probably turning in his grave in the cemetery of Lodz. 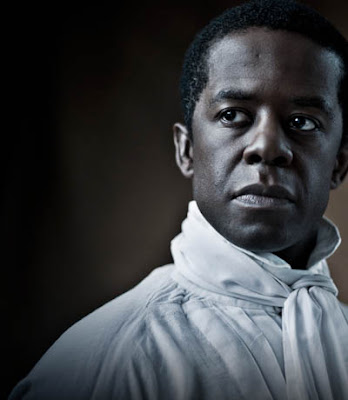 Posted by A London Theatregoer at 17:02