13th Amendment to the US Constitution
"Section 1. Neither slavery nor involuntary servitude, except as a punishment for crime whereof the party shall have been duly convicted, shall exist within the United States, or any place subject to their jurisdiction. Section 2. Congress shall have power to enforce this article by appropriate legislation."

Lincoln tells the dramatic story of President Abraham Lincoln’s attempt to pass an amendment to the constitution of the United States that would forbid slavery and recognize black people as equal in the eyes of the law to white US citizens. It shows how a man of courage and moral conviction may have to act deviously, break personal commitments and bribe potential supporters (with jobs for the boys if not with money) to grasp what he believes is a fleeting opportunity to achieve a supremely important moral objective. Abraham Lincoln's biggest moral quandary is to have to trade-off the prolongation of a bloody war against his belief that once that war is won he will find it near impossible to assemble a majority to amend the constitution in such a way that slavery would be abolished throughout the United States.

Watching the story unfold it may take today's viewer, uninitiated into US political history some getting used to that in 1865 Abraham Lincoln and his supporters were in the Republican Party while those opposed to a federal abolition of slavery were mainly members of the Democratic Party.

A great opportunity lies in treating major historical events in literature and the performing arts. In fictionalized treatment a great author can explore the inner life and the character of the main protagonists. In the best cases, William Shakespeare's historical plays for example, the reader emerges with a deeper understanding and empathy for a historical situation and its protagonists than a treatment restricted by the method allowed to an academic historian can do. The price to be paid is that facts have to be augmented with speculation and are sometimes distorted by political constraints and intentions of the period in which the artistic treatment takes place.

Wolf Hall and Bring Up the Bodies, the Man-Booker Prize winning novels by Hilary Mantel about Henry VIII’s Private Secretary Thomas Cromwell are recent proof, if proof were needed, how fiction can enhance and deepen our understanding of historical fact by engaging parts of intellect and emotion that pure history cannot normally reach.

Even if the is no shortage of historians who have problems with the historical accuracy of some of the events, as a piece of intelligent fact based fiction, Lincoln is an excellent film. Take away the period costume and the wigs - the issues Lincoln deals with and the political craft its depicts are as relevant today as they were in 1865. The American Civil War (1860 - 1866) plays an important role, but it is not a film full of battle scenes. Interpersonal drama is its focus; and it goes on among political rivals and personal friends, between husband and wife, father and son,  master and servant, charismatic leader and perplexed follower.

Top quality begins with Tony Kushner’s screenplay which should also be easily adaptable into a first class theatre play. It contains unforgettable dialogue, in turn quietly intimate, in turn rousing and rhetorical. It credibly presents the subtle art of personal and political persuasion. Steven Spielberg’s direction matches Kushner’ s screenplay scene for scene.  And the acting performances by an outstanding cast ensemble do more than justice to both direction and writing. There are memorable characters being created by Sally Field and by Tommy Lee Jones. Daniel Day-Lewis’ performance in the title role has already been much praised in he media, so I was ready for my high expectations to be met. They were however far surpassed: from now on the Abraham Lincoln from this film, will be the Abraham Lincoln that will come to my mind whenever I’ll hear the name of this most impressive of US Presidents mentioned.

If you like great drama, great history or modern politics or just great films, watching Lincoln will be a delight. 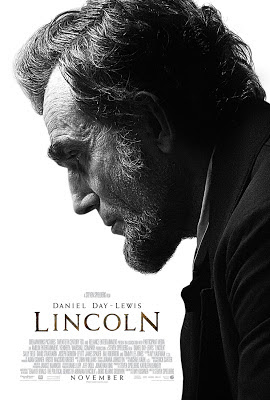 Posted by A London Theatregoer at 21:09