Lucas (Mads Mikkelsen),  has become a kindergarten teacher in the village where he grew up.He is also part of a group of friends who in the local tradition regularly goes hunting together in the local countryside with a group of friends. Hunting successes are celebrated and hunting failures are mocked at sumptuous meals where the prey is devoured while alcohol and conversation flow freely.

Lucas has just gone through a lengthy divorce and his son has to decide whether he wants to live with his mother or with Lucas. At the kindergarten he meets and starts a relationship with Nadya (Alexandra Rapaport) a recent immigrant to Denmark, who works there.

The head teacher quickly jumps to the plausible conclusion that 4 year old Klara cannot have invented such a story even though Lucas, of course, denies it. She suspends Lucas, informs the parents of all the children in the kindergarten of her suspicions and brings in an experienced child-abuse specialist to speak to Klara and the other children. As the investigation proceeds, Lucas defends himself and tries to stand his ground as he is ostracised by the community of which he was part.

Jagten is a realistic social drama of the kind that the many international fans of the Danish television series Borgen and The Killing miss since these have come to the end of their run. Their common theme is how ordinary people, with whom we can easily identify,  face extraordinary situations in their professional lives and, at the same time, try to hold their private lives together. “Situations make a man and not a man a situation”; and that, of course goes for women, too. There are no evil or heroic characters here, just everyday people who have to face a situation they never expected to be in as best they can and have their character tested by it.

Mads Mikkelsen as Lucas stands out among a very competent ensemble of actors. His strong understated performance rightfully has earned him the best actor award at the 2012 Cannes Film Festival. The story of Jagten unfolds over one year with a strong sense of place. It shows the changing seasons and local customs that make a community. This lets us empathise with Lucas’ need to fight back and attempt to clear his name rather than just eave. Co- writer (with Tobias Lindholm) and director Thomas Vinterberg tells a story that holds the viewers attention from beginning to end. We can sympathize with all the characters, and so Jagten makes the viewer think deeply and from different perspectives. Our thoughts will return to this story and its characters long after the film has ended.

Don’t be put off by not wanting to see a film about child abuse. The accusation of child abuse drives the actual theme: a close and friendly community plausibly, yet mistakenly turns on one of its own; he in turn fights back, sometimes in despair but also with great dignity. Paradoxically that dignity is likely to come in no small part from having been raised in the community that now threatens to destroy it. 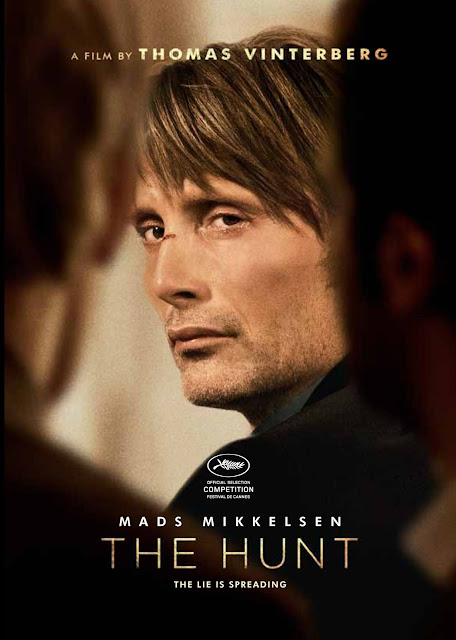 Posted by A London Theatregoer at 19:32