Daughter of a rich landowner, the young Thérèse grows up in the Landes-region not far from Bordeaux in the 1920s. Her mother has died and the bookish Thérèse spends her summer holidays with her best friend Anne (Anaïs Demoustier) the daughter of a neighbouring landowner.

Strong minded, straight talking and intelligent, she senses that her inner sensibilities do not go well with the expectations society has of her. “I have too many ideas in my head” she tells Anne. “Marriage will be good for me. It will put some order into my my ideas.” And so the 20- something Thérèse (cast somewhat implausibly with the 40-something Audrey Tatou) decides to do what is expected of her and marries Anne’s much older-brother Bernard Desqueyroux (Gilles Lellouche), a dull country squire without intellectual ambitions. Bernard is quite taken by his beautiful fiancée, who with disarming honesty spells out to him that this marriage is all about joining the neighbouring families’ pine-forests together.

What must now follow is the tragic tale of wealthy country folk suppressing a young and rebellious spirit. And indeed, this will be rather dark tale; yet the protagonists and the people that surround them are more nuanced than the stereotypes they represent. This gives the story some surprising scope for unexpected yet plausible sorties from the beaten path.

“Thérèse Desqueyroux” is based on the novel by French author, Francois Mauriac who went on to win the Nobel Prize for Literature. This is director Claude Miller’s last film; he died much too early in April 2012 at the age of 70. Miller’s direction imbues the film with a clear sense of place and time. The landscape and water around the village of Angelouse is a strong character in its own right. Photography and costume are beautifully executed and brought into relief by the carefully chosen piano-music. A competent ensemble of actors led by Audrey Tatou, who gives a strong performance in the main role, contribute to making this an appropriately slow-moving, confident adaptation of Mauriac’s dark and intriguing novel. 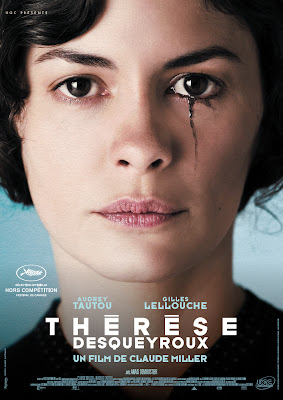 Posted by A London Theatregoer at 23:49