To Be or Not To Be, Play by Nick Whitby based on the film by Ernst Lubitsch, Stadschouwburg, Amsterdam, 8* out of 10

This review is an exercise in narrow-casting: an English review of a play which is only accessible to Dutch speakers.

September 1939. A Polish theatre company comes together in Warsaw to rehearse a bitingly satirical play about Nazi-Germany. But before its premiere, the Polish government-censor forbids the performance as the Polish government fears that it will provoke Poland’s powerful neighbour to the West. So the theatre company decide to play Shakespeare’s Hamlet instead. During the performance of Hamlet, a young Polish Airforce pilot, Lieut. Stanislav Sobinski becomes starstruck by Maria Tura the actress wife (Ellen ten Damme) of the jealous and ego-maniacal theatre director Josef Tura (Viggo Waas). After the Germans invade Poland he will need the theatre company’s help to save the names of the members of the Polish resistance being communicated to the Gestapo.

To save the resistance, the jealousies of the drama-queens (and kings) in the theatre company must give way to courageous patriotism as they face playing the most important roles of their lives as if their life depended on it . In fact, it does.

To Be Or Not To Be is an adaptation to the stage of the eponymous 1942 Hollywood Film Comedy Classic directed by Ernst Lubitsch remade in the 1980s with Mel Brooks.

In 1942 the great Ernst Lubitsch who was Jewish and had escaped from Germany to the United States, made his film a hilarious comedy. He could do this, since the US had not yet entered the war (World War II) and the worst of the atrocities to be carried out by Germans under their Nazi leaders were yet to come. In the US and England making fun of the Nazis was an arrow in the quiver of  psychological warfare against the Germans. As these countries never suffered occupation by the Germans and remained rather open democracies during World War II, they also kept their penchant for hilarious comedy about grotesque Nazi characters after World War II, once the Germany had been beaten. A production in Amsterdam of a play based on this film, a city under brutal German Nazi occupation during World War II, the city of of Anne Frank, where the majority of resistance fighters, Jews and other “undesirables” were murdered, must necessarily answer the question whether the Anglo-American habit of unadulterated comedy is appropriate for this subject.

The answer given to this question by director Gijs de Lange is no, yet he manages to address this tricky issue in an amusing manner by introducing the stand-up comedian Raoul Heertje, well known and popular for intelligent satirical and political comedy, as the means by which the original film comedy is mitigated by some thoughtful questioning. Heertje is himself Jewish and switches between playing himself and the main Nazi character Col. Erhardt. Furthermore, the ending of the play is more like Charlie Chaplin’s ending for his great Nazi parody “The Great Dictator” than that of Ernst Lubitsch’s original film.

The Dutch production of To Be or Not To Be is an enjoyable mix of comedy, stand-up comedy, slapstick, musical variety show and (a little bit) of drama. The inclusion of stand-up comedy elements is largely successful, the case for an adapted ending full of pathos is less convincing. Despite its undoubted flaws, this play is intelligently silly; it is funny and enjoyable in the appropriately thoughtful way that a Dutch audience would have the right to expect. Not a mean achievement. 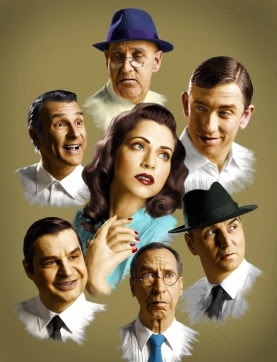 Posted by A London Theatregoer at 11:38