In 1960s Frankfurt a female PhD student invites two giants of German cultural and intellectual life with Jewish roots, the famously egomaniac sociologist Theodor Adorno and the self-assured philosopher Hannah Arendt to a dinner party.  She promises to let them see hitherto undiscovered writings of their former colleague Walter Benjamin, a great literary critic and philosopher, who, unlike Adorno and Arendt did not survive Nazi persecution. The dinner party turns into intellectual and sexual whodunit with a few twists that will be very uncomfortable for some of the protagonists.

For this play Carl Djerassi has adapted his 2011 novel of the same name about real intellectual greats with big egos and a special penchant for aligning their sex-lives closely with their academic interests.

In his day-job Djerassi is a superstar chemist still lecturing at 90, and the inventor, most notably, of the contraceptive pill and other important scientific innovations. He is also is the not unsuccessful writer of novels and plays about scientists and academics facing tricky, potentially career destroying or career making dilemmas. For Djerassi’s characters, intellectual achievement is always also very sexy, and sex is intellectually stimulating or even subject of their research; it is though more discussed, dreamed about and imagined than ever engaged in.

For those who like intellectual, adversarial sparring around the dinner table including talk about sex and pornography, Foreplay can be interesting, whether they are familiar with the non-fictional characters and their ideas or not; the play becomes more gripping as it develops.  The acting is good-quality with well-researched and funny renditions of Adorno (Andrew Stephen), Arendt (Judi Scott) and at times moving renditions of Walter Benjamin (Mark Ooosterveen). Set and costume fit the play and period well. Quite entertaining. 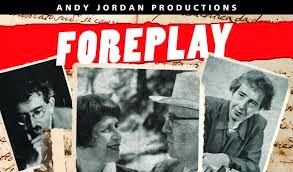 Posted by A London Theatregoer at 16:02