Economist Thomas Piketty speaking about his best-selling book “Capital in the 21st Century” at the London School of Economics, 8* out of 10

The French "rock-star economist" Thomas Piketty has been called the "new Karl Marx" by The Economist Newspaper. The Guardian newspaper called his lecture at the London School of Economics, the "hottest Economics ticket in town". Piketty's emphasis on wealth distribution has made him the target of many free-market capitalist commentators and newspapers. But I wonder what Margaret Thatcher would have made of his ideas on strengthening the middle class through the redistribution of wealth.

The French economics professor Thomas Piketty is on a worldwide lecture tour to promote his surprise best selling book (696 pages, no less) “Capital in the 21st Century”.

What is the book about? The Economist magazine summarises it in 4 paragraphs thus:

IT IS the economics book taking the world by storm. "Capital in the Twenty-First Century", written by the French economist Thomas Piketty, was published in French last year and in English in March of this year. The English version quickly became an unlikely bestseller, and it has prompted a broad and energetic debate on the book’s subject: the outlook for global inequality. Some reckon it heralds or may itself cause a pronounced shift in the focus of economic policy, toward distributional questions. This newspaper has hailed Mr Piketty as "the modern Marx" (Karl, that is). But what’s it all about?

"Capital" is built on more than a decade of research by Mr Piketty and a handful of other economists, detailing historical changes in the concentration of income and wealth. This pile of data allows Mr Piketty to sketch out the evolution of inequality since the beginning of the industrial revolution. In the 18th and 19th centuries western European society was highly unequal. Private wealth dwarfed national income and was concentrated in the hands of the rich families who sat atop a relatively rigid class structure. This system persisted even as industrialisation slowly contributed to rising wages for workers. Only the chaos of the first and second world wars and the Depression disrupted this pattern. High taxes, inflation, bankruptcies, and the growth of sprawling welfare states caused wealth to shrink dramatically, and ushered in a period in which both income and wealth were distributed in relatively egalitarian fashion. But the shocks of the early 20th century have faded and wealth is now reasserting itself. On many measures, Mr Piketty reckons, the importance of wealth in modern economies is approaching levels last seen before the first world war.

From this history, Mr Piketty derives a grand theory of capital and inequality. As a general rule wealth grows faster than economic output, he explains, a concept he captures in the expression r > g (where r is the rate of return to wealth and g is the economic growth rate). Other things being equal, faster economic growth will diminish the importance of wealth in a society, whereas slower growth will increase it (and demographic change that slows global growth will make capital more dominant). But there are no natural forces pushing against the steady concentration of wealth. Only a burst of rapid growth (from technological progress or rising population) or government intervention can be counted on to keep economies from returning to the “patrimonial capitalism” that worried Karl Marx. Mr Piketty closes the book by recommending that governments step in now, by adopting a global tax on wealth, to prevent soaring inequality contributing to economic or political instability down the road.

The book has unsurprisingly attracted plenty of criticism. Some wonder whether Mr Piketty is right to think the future will look like the past. Theory argues that it should become ever harder to earn a good return on wealth the more there is of it. And today’s super-rich mostly come by their wealth through work, rather than via inheritance. Others argue that Mr Piketty’s policy recommendations are more ideologically than economically driven and could do more harm than good. But many of the sceptics nonetheless have kind words for the book’s contributions, in terms of data and analysis. Whether or not Mr Piketty succeeds in changing policy, he will have influenced the way thousands of readers and plenty of economists think about these issues.”

Piketty has stirred controversy with the last part of his book in which he suggests a tax being imposed on net-wealth.  This and the word “Capital” in he title of his book, has stirred those who believe in non-interventionist doctrine of capitalism, to accuse him of all sorts of things: being a Marxist (which he is not), presenting false data (he is ready to debate and show that he has not), beating his ex-girlfriend the current French culture minister well known for her stormy love affairs (which he denies) and finally committing the ultimate crime in the eyes of Anglo-Saxon defenders of capitalism red in tooth and claw, that of being French (which he is).

Piketty is very presentable and speaks excellent English with a heavy French accent.  He explains his findings in a very clear presentation with low-tech slides, which is accessible to normal mortals not familiar with the intricacies of Economics.  From time to time he loosens things up with self-deprecating and witty remarks about himself, his subject and his opponents’ thinking.

He is ready to robustly defend the research he and his numerous collaborators produced about the development of income and wealth since the industrial revolution. At the same time, he is intensely relaxed about people who draw entirely different conclusions about the need for policy changes than he does. In his view, such differences of view are par for the course for social science research. Moreover, he says, that while social sciences can be very useful in explaining the past, the future remains unpredictable so that his or anybody else’s hunch about how things might develop are speculation and may be proved entirely wrong by unexpected events and developments.

Piketty believes in Western style democracy and a capitalism moderated by some state intervention to prevent or correct developments that may constitute a danger for both.  Based on his findings he believes that capitalism, as we know it, tends to greater concentration of wealth at the top. If this development is allowed to continue unchecked, it risks undermining the existence of a middle class on which democracy, freedom and successful economic development under the capitalist system depend. He explains that it is with that reasoning that he makes the policy recommendations based on his findings.

I have read a few chapters of his book, looked at a number of newspaper articles on it, and have now seen the “rock-star economist” perform at the lectern in what the Guardian newspaper described as “the hottest economics ticket in town”. My conclusion is that Piketty has done something very useful in being one of the first to do empirical research on the development of wealth and income since the industrial revolution in a large number of countries. Rather than just theorising about wealth, researchers and policy-makers now have a lot of data to draw on. Piketty is a creative researcher, also very good at presenting and explaining his data in plain English. The heavy French accent is not there when you read the book and does not detract from his presentation when he speaks. Thomas Piketty has his views on politics, but contrary to famous Nobel prize winning economists like Milton Friedman or Paul Krugman he is no ideologue or polemicist, keen on being a major influencer of political decisions, but primarily a researcher. He is happy to share his political views and make policy recommendations; but they are not where his main interests lie.

Finally, I cannot help but wonder what Margaret Thatcher would have made of Piketty’s research and ideas.  After all, her most revolutionary policy was to turn thousands of council house tenants into home owners, probably the most significant transfer of “capital” from the state to low-income, low-wealth households, giving them a unique opportunity to own and build some capital of their own and join the ranks of the middle-class.  Could it be that Margaret Thatcher was an instinctive progressive fighter for boosting the ranks of the “capital-owning” middle class, an idea very dear to Thomas Piketty’s heart? 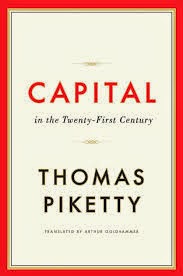 Posted by A London Theatregoer at 13:43