In adapting Hilary Mantel’s Booker Prize winning novels into two plays for the stage Mike Poulton has done very well. Although the adaptation is not, and probably cannot be, as good as the original, Poulton and the RSC have produced a gripping and excellent piece of theatre.

The Court of Henry VIII in 1527.  Thomas Cromwell, a blacksmith’s son, and assistant to Cardinal Thomas Wolsey is on his way to becoming the “eminence grise” behind the throne of Henry VIII. Mentored by Cardinal Wolsey, Cromwell, like many others at court, falls under Henry’s charismatic spell and becomes his trusted advisor and manager of the most delicate and dangerous projects, when execution (in all senses of the word) requires the whole range of skills from subtle diplomacy to ruthless brutality. While staying loyal to the king at all times Cromwell manages to settle some of his own scores and get some of his personal pet-projects completed, wherever the opportunity for additional collateral benefits presents itself.

Hilary Mantel has brilliantly told the story of the rise and fall of Anne Boleyn seen from deep within Thomas Cromwell’s mind in her two Booker Prize winning novels Wolf Hall and Bring Up The Bodies.

The supreme irony of Henry VIII desperate and - for some of his entourage - deadly desire for a worthy heir, is that he did not recognise that Anne Boleyn, whose demise he willed because of it, had already produced one:  Anne and Henry’s daughter Elizabeth would become one of England’s greatest monarchs.

In adapting Mantel’s novels into two plays for the stage Mike Poulton has done very well. Although the adaptation is not, and probably cannot be, as good as the original books, it is a gripping and excellent piece of theatre.

Director Jeremy Herrin ensures that the action moves along on a minimalist set dominated by a huge and hugely symbolic cross: England’s cross of St George and the cross of the catholic church get into a crucial conflict, out of which the Church of England arises as an initially unintended consequence. The focus of the plays is on the on-goings at court around the skilful, charismatic, dynamic and manipulative King Henry VIII (Nathaniel Parker) and the extraordinary women and men that surround him: Queen Catherine (Lucy Briers), Anne Boleyn (Lydia Leonard), the Boleyns, Cardinal Wolsey  (Paul Jesson), Thomas Cromwell (Ben Miles) and a number of minor though by no means insignificant characters. Some are more aware of the constant danger the King’s U-turns mean to their lives than others; but even they cannot resist the temptation to keep dancing while the music is playing. They are hoping that it won’t be them who will soon encounter one of the King’s axeman or torturers when the music stops, for having aroused his displeasure by being in the way of his plans.

The musical score by Stephen Warbeck, particularly for festive occasions at court, sounds more like Klezmer than Green Sleeves, but not unpleasantly so. The acting performances are excellent, with Ben Miles a strong Thomas Cromwell. Bring Up the Bodies, the story of Ann Boleyn’s demise, is darker and more gripping than Wolf Hall.  For all those who love history and the theatre the RSC has produced accessible high quality entertainment. 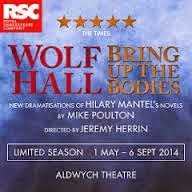 Posted by A London Theatregoer at 16:41