Alex Timbers’ production is dynamic and inventive, getting members of his audience involved in the action in very creative ways. A young, attractive and energetic ensemble delivers the choreography of Annie-B Parson to great effect so that the enthusiasm truly spreads across the audience. Very watchable.

The intimate theatrical space formerly known as the Cottesloe has been refurbished and renamed the Dorfman Theatre. It is being inaugurated with the rags-to-riches biopic of one of the post-war period’s most notorious female political icons, Imelda Marcos.

Here Lies Love tells the story of the former Philippines first lady who had to be rescued by the US government by helicopter from the roof of the Manila presidential palace when the Philippines went through a peaceful uprising long before the Arab Spring and removed the authoritarian regime established by General Ferdinand Marcos with a bloodless overthrow and return to democracy.

Imelda’s humble origins contrasted with her unlimited ambition for power and wealth. She leveraged her beauty queen looks to good effect. Rejected by her boyfriend the later senator and presidential hopeful Ninoy Aquino for being taller than him, she managed to gain the undying devotion of World War II-hero and later President Ferdinand Marcos. Her appetite for New York, glamour, shoes and parties could now be fully indulged in mainly with other people’s money being syphoned off and turned into her own. (The musical ends with her exile from the Philippines, but in 2014 , now well into her eighties, Imelda is back in the Philippines as an elected senator with an estimated net worth in excess of USD 5 billion).

Fatboy Slim (formerly of the Housemartins) and David Byrne (formerly of the Talking Heads) are themselves British music-scene icons whose heyday overlapped with Imelda’s. She was a wannabe disco-queen and performer at her own glamorous celebrity parties for Western elite politicians and Hollywood wannabes. The musical treatment by Slim and Byrne captures this very well.

Alex Timbers’ production is dynamic and inventive, getting members of his audience involved in the action in very creative ways. At the beginning, the theatre looks like a 1980s disco set and the moving and rotating stage works excellently well as the action moves across time and place. The designers (set: David Korins, lighting: Justin Townsend, sound: M. L. Dogg and Cody Spencer) deserve a special mention. A young, attractive and energetic ensemble delivers the choreography of Annie-B Parson to great effect so that the enthusiasm truly spreads across the audience.

The political background to the story is presented effectively through projections of TV footage of real events. While all the international political drama is not as fully explored as Imelda’s ruthlessness greed and disappointment in the lack of love shown her by her people, one leaves this musical thoroughly entertained, and energised and with the New Years resolution that one does have to do some background reading on the politics and history of the Philippines in the 20th century.

Natalie Mendoza is a charismatic Imelda Marcos, Marc Bautista (Ferdinand Marcos) and Dean John Wilson (Ninoy Aquino) give strong performances and Martin Serreal (as DJ) really rocks the joint and gets the new Dorfman theatre off to a great swinging start. 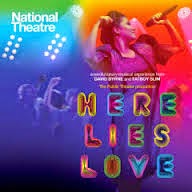 Posted by A London Theatregoer at 20:02