This is a true spy story about a most unlikely informant and his deceptively cuddly handler. Every avid reader of John Le Carré’s novels anticipates what must follow: the tough and cynical world of espionage agencies will triumph over any optimistic belief in human nature  – but reality can be stranger than fiction, even when it comes to trumping a comfortably pessimistic world-view.

The Green Prince tells the story of Mussab Hassan Youssef, son of one of the leaders of the Hamas movement, who for 10 years worked as an informant for the Israeli Shin Bet spy agency. The title of the film is the codename given to him by Shin Bet. Mussab Hassan Youssef and his Shin Bet handler Gonen Ben Yitzhak tell the almost unbelievable story in their own words through separate interviews.

Mussab Hassan Youssef gives us considerable insight in how he became an informant and how he justified his role by preventing numerous suicide bombings of innocent Israeli civilians by the militant wing of Hamas. Both the informant and his handler, the latter initially much more cold and calculating, gradually developed personal motivations and a close relationship. That relationship, of course, is highly asymmetric. Ben Yitzhak is in the powerful position. He has the backing and support of the formidable Shin Bet behind him. Mussab Hassan Youssef has to rely entirely on himself. He risks life and limb every minute of every day. But gradually Hassan Youssef develops his own inner coherent narrative and self-confidence; the tables begin to turn.

At this point every avid reader of John Le Carré’s novels knows what will happen next. The tough and cynical world of espionage agencies must triumph over any optimistic belief in human nature  – but reality can be stranger than fiction, even when it comes to trumping a comfortably pessimistic world-view.

This is a story of a journey by two human beings whose lives intersect and who at different moments are compelled to make important decisions raising moral dilemmas that lie at the outer limits of normal human experience. The strength of this film is that it draws us into the question: what would I do?

For the deceptively cuddly Gonen Ben Yitzhak this is the story of an inner journey. For The Green Prince his code-name appears to foretell not only an inner journey but an amazing outer transformation: through the metaphorical kiss of Beverly Hills plastic surgery and dental work, Mussab Hassan Youssef morphs from unattractive frog to Hollywood like Prince Charming.

The fictionalized action movie of his life may already be in the works, Green Prince - the musical cannot be far behind.

Nadav Shirman has created a compelling documentary that deservedly won the prestigious Sundance Festival 2014 audience award. The questions raised as you watch this movie will resonate for a long time.  A must see. 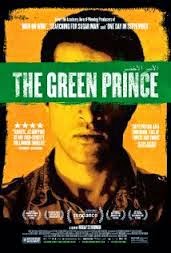 Posted by A London Theatregoer at 14:30