Three Days in the Country, after Ivan Turgenev, adapted and directed by Patrick Marber, National Theatre, London, 8* out of 10

Shortening Turgenev’s original “Month in the Country” to three days, Patrick Marber focuses on the comedic side of this Comedy of Manners. Even on the first preview night, this was a smooth and most enjoyable sell-out performance on the big Lyttleton stage.


In a long hot summer, in the 1850s at the Islaev country estate the Arkady Islaev (John Light) and his wife Natalya Petrovna (Amanda Drew) are hosting guests for the summer. Their young son Kolya is being tutored in German by the young student Alekesei Bilyaev (Royce Pierreson) protégé of the German Professor Schaaf (Gawn Grainger).  While Arkady Islaev busies himself with running his estate, Bilyaev awakes the the passions of Natalya Petrovna and her 17-year-old ward Vera (Lily Sacofsky). Before deciding on whether it would be wise to engage in any sexual relations with the upper echelons of the house he has to decide whether a mutually enjoyable fling with Katya the maid (Cherelle Skeete). Meanwhile Nataly Petrovna and Vera have to consider other potential partners for what they have in mind, none as young and vigorous, as Bilyaev, though. There is Rakitin (John Simm) Arkady Islaev’s best friend and secretly in love with Natalya, who has made him her best friend and confidant and there is the hapless middle aged neighbour Bolshintzov who thinks young Vera would be a way to marry his fortune together with the Islaev estate. Livening up the proceedings is country doctor Shpigelsky (Mark Gatiss) who is better evaluating his own strength and weaknesses then making accurate diagnoses.

Shortening Turgenev’s original “Month in the Country” to three days, Patrick Marber focuses on the comedic side of this Comedy of Manners, although this being 19th century Russian comedy there is quite a bit of melancholy and drama but not the deeply felt pathos of the Chekhovian Russian soul. It should be noted that Turgenev wrote his play before the Chekhovian masterpieces had gained recognition. He had to wait a few decades to get his play past the Tsarist censor. Nonetheless interest in Turgenev grew Chekhov’s plays had become famous. In a sense Turgenev is Chekhov-light and funny. Being caught in a loveless marriage cannot be much fun for Natalya Petrovna, and restrained by her sense of bourgeois morals and absent the modern apps of Tinder and Ashley Madison, she has to make do with desiring, or not, the male company available at her country estate.

Thanks to an attractive set and costumes, direction that underscores the intent of the writer and a very competent ensemble of actors this production, even on the first preview night, was a smooth and most enjoyable performance on the big Lyttleton stage. Mark Gatiss stands out by making the most of all the best lines, followed not far behind by John Simm’s Rakitin and Amanda Drew’s Natalya Petrovna.  Enthusiastic applause by audience in  the sold-out preview performance. 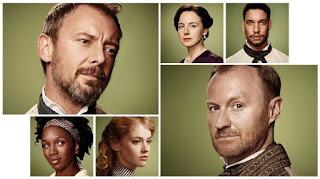 Three Days In The Country

Posted by A London Theatregoer at 18:24