Herzl Reloaded, by Doron Rabinovici and Natan Sznaider, readings from their book, Schauspielhaus Zurich, 8* out of 10


In a three-way e-mail exchange, the Viennese author Doron Rabinovici, the Israeli sociologist Natan Sznaider and the spirit of the father of modern Zionism, Theodor Herzl, discuss the past, present and future of the State for the Jews. The authors presented readings followed by a moderated discussion at the Zurich Schauspielhaus on 5 March.

A novelist, a sociologist and a dreamer-seer meet in cyberspace to engage in an e-mail exchange about the state of the “State for the Jews”, Israel viewed from the perspective of original dream, current reality and future potential.  The result is Herzl Reloaded, the book by Rabinovici and Sznaider. Despite its English title the book is currently only available in German.

On Sunday 5 March 2017, the authors playing themselves and Klaus Brümmelmeyer, an actor playing Theodor Herzl, presented extensive readings of key passages from the book. This was followed by a discussion between them which was skilfully moderated by Yves Kugelmann, the editor of Switzerland’s largest circulation Jewish magazine.

Doron Rabinovici, the novelist born in Israel to holocaust survivors, has lived in Vienna since early childhood.

Natan Sznaider, Professor of Sociology at Tel Aviv University was born in Germany in 1954. He also is the son of holocaust survivors. Having emigrated to Israel at the age of 20, he now lives the reality of Zionism in 2017.

The seer, Theodor Herzl (1860 – 1904), was born in Budapest and lived in Vienna where he worked as a novelist, playwright, journalist and public intellectual. Herzl's utopian dream:  a State for the Jews through which they would emancipate themselves among the nations and thus combat and overcome ubiquitous antisemitism. Herzl died in 1904, but lives on through his books, plays, letters and newspaper articles. Based on what he considered achievable at different times, Herzl experimented with several versions of his dream, such a state in Uganda or the conversion of all Jews of future generations to Christianity. Ultimately, he reached the conclusion that the one thing that made sense was the creation of a modern state for the Jewish people in the land of Israel. Through his ideas and tireless work, he became a protagonist of modern Israel’s creation, an almost mythical figure mentioned by name in Israel’s Declaration of Independence.

For Doron Rabinovici modern Israel’s legitimacy as a State is inextricably tied up with the Holocaust. Only by having their own state would Jews be able to ensure their survival. A position that was given international legitimacy by the community of nations through the decision by the UN General Assembly to recognize the State of Israel in 1948.  Rabinovici distinguishes the golden age of modern Israel from 1948 to 1967.  In his view Israel’s 1967 occupation had made the moderate Western socialist “city-on-a-hill” that was the State for the Jews go awry. The occupation of Palestinian land and people has changed Israel proper and in his view, not for the better. As Rabinovici sees it, assisting the creation of a peaceful democratic Palestinian state alongside a peaceful democratic and strong Israel would have been and still is an effective pragmatic step; moreover, it is a moral duty not only for all Israelis but also for all Jews.  The responsibility for lack of progress lies with both sides of the conflict and the occupation is becoming an ever more normal situation as far as Israeli society is concerned; but the longer the occupation lasts the more difficult it is for a fair two-state solution to be implemented and the further away Israel moves from its original ideals. Nevertheless, Doron Rabinovici, a feisty resilient social democrat and human rights activist, continues to defend Israel with persistence and wit, while strongly criticising what he sees as its excesses.

Natan Sznaider, the sociology professor, speaks with the legitimacy of an Israeli citizen living in Israel. For him the bible is a more suitable and positive founding narrative for the state of Israel than the Holocaust. As Sznaider sees it, Israeli civil society today is a lively mix of diverse tribes and groups interacting among themselves and between each other, with a diversity and vibrancy often overlooked outside of Israel.

He points out that the 1948 to 1967 period when Israel was led by an Ashkenazi elite wasn’t quite as golden as Rabinovici would like to believe it was.  And thus, the period of 1967 to 2017 does not represent as steep a decline as Rabinovici has made it out to be. Today's Israel is the result of perhaps inevitable adaptations of the state for the Jews to the realities of the internal and external changes in conditions which Israeli society and its body politic had to manage.

In Sznaider’s view, simply returning to the 1967 borders would not solve much and is not a good idea, even if it were politically on the cards. So, while for Rabinovici ending the occupation is practical and healthy for Israel’s soul as well as for its position in the “family of nations”, Sznaider believes it would be a phenomenally risky act that could be misunderstood by Israel's enemies as a sign of weakness or even of hubris. In either case, it would likely put Israel in a position that would be much worse than the status quo. As Sznaider sees it, managing the status quo in the volatile new Middle Eastern and geopolitical environment is the least bad option available.

Such realism sounds convincing at a time when the Christians of the Middle East who have lived peacefully in Muslim majority countries for millennia, are forced to flee the region in fear of their lives. Nevertheless, one cannot help but wish that sooner rather than later, voices like Rabinovici’s, to the extent that they also exist among Israel’s citizens, would get more traction in the Israeli political debate. Israeli political thought and leadership today suffers from an overdose of sarcastic realism which blinds it to creative ideas directed towards a moral aspiration for country and society. Enlightened self-interest may lie in tipping the balance more towards the latter.

As far as Herzl’s dream is concerned Tel Aviv has not become the “Vienna-by-the-Yarkon” which he imagined and hoped for. But it is a young, passionate and vibrant modern city, beating heart of the “start-up nation”. Perhaps Israel today is not everything that the Jews of the diaspora could have wished for; but it is a country, warts and all, of which not only Jews in Israel can be proud.

Shortly before his death Herzl appealed to his designated successors: “Just don’t do anything stupid while I’m dead”. That was always too much to ask.

In any case on a Sunday evening in March 2017, in a well-filled Schauspielhaus in Zurich the mainly Swiss Jewish audience was stimulated and entertained, both by the readings and by the discussion that followed. For two people to enjoy discussing serious disagreements in a civilized, sincere, witty and entertaining manner is a considerable achievement these days, certainly when the topic is Israel and Zionism. The Swiss Jewish cultural society Omanut is to be congratulated for organising an especially interesting and stimulating event which was rewarded by a large attendance and warm applause for the protagonists of the evening.

The link below is an English page by the publishing house Suhrkamp: 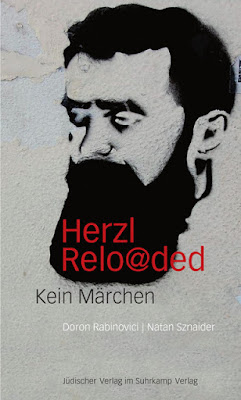 This is the 3rd version of this blog entry (posted 20 March 2017 at 12:41 hours) correcting a number of spelling/grammatical errors from the earlier versions and incorporating small editorial changes.

Posted by A London Theatregoer at 16:25