The Glass Menagerie, Play by Tennessee Williams, Duke of York’s Theatre, London, 9* out of 10

Cherry Jones shines in John Tiffany's beautifully staged production of Tennessee Williams autobiographical play at the Duke of York's Theatre in London. The many award nominations are richly deserved. The Glass Menagerie dovetails beautifully with another cultural highlight that can currently be seen in London. Until 4 June, The Royal Academy shows “After the Fall: Painting in the 1930s“.

Amanda (Cherry Jones) lives in St. Louis with her son Tom (Michael Esper) and her daughter Laura (Kate O’Flynn), both in their twenties. Tom, an aspiring writer with wanderlust, works in a warehouse. The family relies on his income but he is dying to leave St. Louis. He tries to escape the oppressive atmosphere of his home by going to the movies whenever he can. Laura, handicapped by a club foot, is painfully shy and avoids leaving the apartment. Her favourite pastime is playing with little figures of animals made of glass, the glass menagerie. Out of necessity, Amanda whose husband has left the family years ago, is a practical working woman. But at night when she speaks to her children, she always reminisces of her comfortable youth as a southern belle when she received gentleman callers, eligible young bachelors all. To her eternal regret she chose handsome looks over comfortable wealth and reliability. Despite living in St. Louis, Amanda dreams of gentleman callers for Laura now, perhaps in the hope to correct her own mistake with a choice for Laura. However, in the modest St. Louis apartment, no gentlemen come calling for Laura. Amanda urges Tom to look for prospects among his work colleagues and friends. But due to Laura’s mental fragility and physical handicap, both Laura herself and Tom do not believe that any gentleman in shining armour can be found for her. When Tom finally invites a work colleague home, Amanda pulls out all the stops to show this gentleman caller true southern hospitality and her daughter Laura in the best light.

Director John Tiffany has created a beautifully conceived production of this American Classic of the 1930s. In the centre of the set designed by Bob Crowley which evokes the dream like atmosphere of some of the scenes there is steel-stairway. Like fire-escape stairs which almost reach the ceiling of the stage it is a symbol both for Amanda’s unrealistically high hopes for Laura and for Tom’s desire to escape from the oppressive atmosphere of his home. When Tom proclaims that living vicariously through going to the movies he stops himself from living his own life he raises an issue that is as relevant in the internet age as it was in the age of the silver screen.  Cherry Jones’ Amanda is memorable, and the acting of the entire ensemble does justice to Williams’ great writing. The deserved result is an enthralled audience at the Duke of York’s Theatre in London and the many award nominations for this production.

The Glass Menagerie is Tennessee Williams first successful play and contains many autobiographical elements. He felt responsible for abandoning his own handicapped sister and once he had become a successful playwright paid for her stay in a care home with the income from his writing.

The Glass Menagerie goes very well with another cultural highlight that can currently be seen in London. Until 4 June, The Royal Academy shows “After the Fall: Painting in the 1930s“, a time when Franklin D Roosevelt’s Federal Art Program, part of his New Deal, encouraged the artists of the time to paint America in the 1930s. 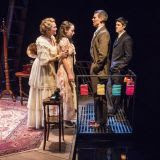 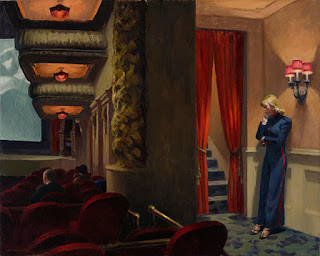