Heisenberg: The Uncertainty Principle, Play, by Simon Stephens, Wyndhams Theatre, London, 7.5* out of 10

A surprisingly moving play brought to life by excellent acting performances in a superbly designed and perfectly lit set.

The Christmas season is the appropriate time for fairy tales. The story of the relationship between Georgie (Anne-Marie Duff), an American woman of limited financial means in her early forties and Alex (Kenneth Cranham) a lonesome, cuddly bear of an intellectual butcher in his mid-seventies is a fairy tale for grown-ups. They meet, apparently by accident. Their respective backstories as well as their story together is revealed over 80 minutes in a series of vignettes of dialogue between them in which they discuss, argue and come close to each other romantically. In the process Georgie and Alex negotiate the terms and mutual expectations from their uneven relationship. Is it utilitarian, selfless, potentially romantic ever shifting, all of the above?

The dialogues contain some fine writing with philosophical and scientific speculation woven in. Used in the title of the play, Heisenberg’s uncertainty principle from the weird and wonderful world of quantum physics states that it is impossible for an observer at any moment to determine both the location and the momentum of a subatomic particle. In this play the uncertainty principle serves principally as a metaphor for people and the relationships between them. We are sub-atomic particles passing in the night forming temporary bonds with each other. In the 18th century, The German  author Johann Wolfgang von Goethe had used a similar metaphor from chemistry for more orderly pairings in his novel "Elective Affinities" (Die Wahlverwandtschaften). In the 21st century and thanks to quantum physics scientific and human affinities appear less predictable.

What lifts this production of a pleasant, life-affirming play above the ordinary, are the excellent acting performances by Anne-Marie Duff and Kenneth Cranham, including the physics and chemistry between them; the superb set design by Bunny Christie perfectly lit by award- winning Paule Constable, that in its purity alludes to the world of quantum physics evoked in the play’s title where the space of the action expands and contracts, beds, benches and chairs appear and disappear with great precision; and finally, Marianne Elliott’s precise direction which brings set, lighting, actors and story together like a well-choreographed small hadron collider.

All in all, this surprisingly moving play about human connection and romance in unlikely places made for a very enjoyable evening in the theatre - not just for ageing nerds.

*Runs at the Wyndhams Theatre in London through 6 January 2018. 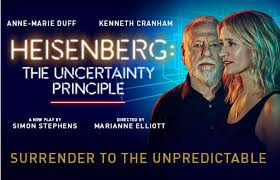 Posted by A London Theatregoer at 12:32