Muhi - Generally Temporary is a must-see, uplifting documentary of the human spirit that tells important truths about ordinary people in Gaza, Israel and everywhere else on this conflict-prone planet who faced with challenging circumstances rise to accomplish the extraordinary. In showing this, the Castelnuovo - Hollander, Elterman and their team have themselves produced an extraordinary labour of love.

2014 Tel Hashomer hospital in Israel and Muhi, a 3-year old Palestinian boy from Gaza has been receiving treatment for a rare autoimmune disease since he was a baby. While waiting for a suitable bone-marrow donor Muhi has developed an infection. To save his life the doctors at Tel Hashomer had to amputate his arms below the elbow and his legs below his knee. He is now dependent on continuous care and treatment. Returning to Gaza would mean certain death because the treatment he needs cannot be administered there. The complex administrative arrangements between the Gaza administration run by Hamas, the officially recognized Palestinian administration run by Fatah and the Israeli administration run by the Israeli government are designed for short-term temporary care of humanitarian cases in Israeli hospitals. The term of Muhi’s generally temporary but specifically indefinite stay must therefore be temporarily extended for an indefinite period to keep him alive. As part of the arrangements between the Palestinian and Israeli governments a responsible adult above the age of 55 must accompany any children from Gaza receiving medical treatment in Israel. In the case of Muhi, the responsible adult is his maternal grandfather and patriarch of a large family in Gaza, Abu Naïm. In 2014 Abu Naïm has been at Muhi’s side at the hospital for more than three years. The administrative barriers for children from Gaza and their families to receiving treatment in Israel are high. Buma Inbar, an ordinary Israeli citizen in his fifties has dedicated himself to helping the families of Palestinian children needing treatment in Israeli hospitals with navigating the labyrinth of permits and procedures across the three bureaucracies involved. Over the years Buma and Abu Naïm have developed a true friendship based on mutual sympathy respect and appreciation. As we follow the extraordinarily courageous, funny and wise Muhi over the next three years of his life lived against the background of a very fraught political context, we recognize that his charming personality, which make him a joy and inspiration to those whose life he touches, is in large measure due to his extraordinary grandfather Abu Naïm who is in turn supported by his Israeli friend Buma.

With their longitudinal study resulting in a fly-on-the-wall documentary centring around Muhi, Castelnuovo-Hollander, Elterman and their teams in Israel and Gaza have captured extraordinary moments of love, tragedy and joy against a most difficult political and institutional context.

Very few people would expect that a film about the relationship between Gazan Palestinians and Israeli Jews would be a powerful document of hope, friendship and love, the extraordinary fruit of which is a fantastic little boy with a wonderful potential. Abu Naïm, Buma and Muhi emanate a force-field of love, respect and humanity that draws in the people around them whether they want it or not. The merit of the film makers and their teams in Israel and Gaza is that they allow their audience to take part and become drawn in too. This is due also in no small part to the excellent editing by Joëlle Alexis. Perhaps the documentary could have been slightly shorter towards the end. Perhaps the subtitles could indicate better for audiences who cannot distinguish between Hebrew and Arabic, when Muhi and Abu Naïm speak Arabic and when Hebrew: paradoxically, yet inevitably, Muhi the Palestinian boy and his Palestinian grandfather speak to each other in Hebrew because this is the main language for Muhi who has been in an Israeli hospital since he was a baby. (Abu Naïm speaks a good Hebrew, because in his youth, before the political situation between Gaza and Israel deteriorated, he worked on building sites in Israel.) But these are minor points, that stand against an extraordinary achievement of documenting the strength of sheer humanity, friendship and love in the most difficult of circumstances.

Muhi- Generally Temporary is currently touring the international film-festival circuit and deservedly picks up award after award. It is a must-see, uplifting documentary of the human spirit that tells  important truths about ordinary people in Gaza, Israel and everywhere else on this conflict-prone planet who faced with challenging circumstances rise to accomplish the extraordinary. In showing this, the Castelnuovo - Hollander, Elterman and their team have themselves produced an extraordinary labour of love.

At one point in the film Abu Naïm is asked by Muhi’s father, who has 8 other children with his one wife, whether it would not be better to bring Muhi back to Gaza and submit to God’s will. What are the chances anyway that Muhi will grow up to be an adult?  “Yesh Tikvah” Abu Naïm says in Hebrew; there is always hope. Thanks to people like Abu Naïm, Buma Inbar and Muhi there truly is. 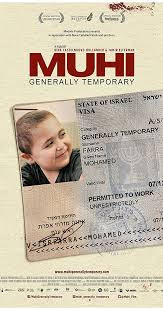 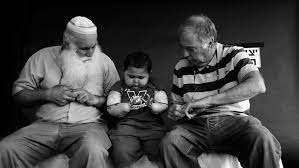 
Posted by A London Theatregoer at 13:29