This exhibition at the Imperial Furniture Collection in Vienna shows the protagonists as furniture and interior designers in the context of a network of intellectuals and business people who furthered their development by giving and getting them commissions.  Open until 28 October 2018, it is the most enjoyable and interesting exhibition I have seen so far this year on Vienna around 1900.  If you live in Vienna or plan to visit the Austrian capital, don’t miss it.

This year, many museums in Vienna are putting on special exhibitions in conjunction with the 100th anniversary of the end of World War I and the Habsburg Empire and the death of several important representatives of “Viennese Modernity”. These include painters like Gustav Klimt and Egon Schiele and architects/designers like Otto Wagner and Koloman Moser.

Internationally, the painters are very well known. The architects and designers who developed a Viennese Style contemporary with Art Nouveau and the English Arts and Crafts Movement, less so. Yet their aesthetic has remained influential well into our time.

An excellent exhibition at Vienna’s Imperial Furniture Collection, which concentrates on three architects of Viennese Modernity, Otto Wagner, Josef Hofmann and Adolf Loos now allows visitors to Vienna to get to know them and their furniture and interior designs in the context of Viennese cultural intellectual and fashion life of the time.

The exhibition shows stunning examples of furniture and interior design by the three protagonists, presents the people who commissioned them to design their apartments and tells the stories of companies such as Thonet, who turned beautiful designs into reality. It shows the networks of Viennese salons and intellectuals in which Wagner, Hofmann and Loos moved and thanks to which they obtained many of their most important commissions. These include such interesting characters as the Austrian writer and cultural critic Karl Kraus, Bertha Zuckerkandl a journalist who kept an influential literary salon and Eugenie “Genia” Schwarzwald, a writer and pioneer of education for women in Austria. A vivid picture of a striving future-oriented rather optimistic Vienna emerges, in which mainly Jewish intellectuals and business people are involved in commissioning work from the non-Jewish Wagner, Hofmann and Loos. Sadly a few years later, many of their clients will perish in the Holocaust, others manage to flee Vienna in time to escape this fate and go into exile.

Apart from wonderful examples of interiors and pieces of furniture, supplemented by contemporary photographs, the panels are full of stories and quotes that enlighten, entertain and create a vivid context for the exhibited pieces and show cooperation and competition among the protagonists on a very human level. All the panels are in German and English. The quality of the translation is excellent.

This exhibition is the most enjoyable interesting I have seen this year on Vienna around 1900. It is a pity, that the well-researched and beautifully written accompanying catalogue is only available in German.

The exhibition at the Imperial Furniture Collection in Vienna is open until 28 October 2018. If you live in Vienna or plan to visit the Austrian capital before that date, don’t miss it.

Unfortunately, like the accompanying catalogue, the website of the exhibition is only in German but all the panels in the exhibition are in English as well as German. 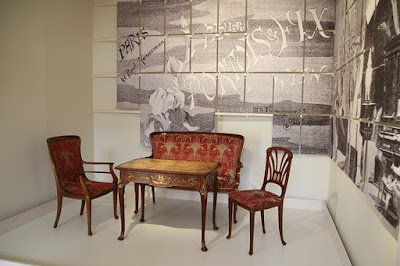 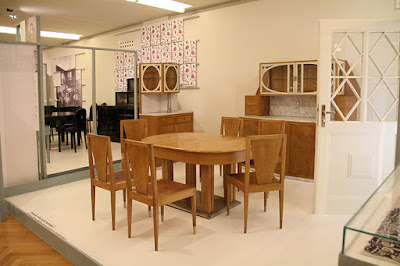 Posted by A London Theatregoer at 11:42