Cabaret Russe by Amateur Theatre group Coup de Théâtre at the Café Lebewohlfabrik in Zurich, 3.75*out of 5


A number of those associated with this production are friends and relatives of mine. Having declared this personal interest at the outset, I aim to make this review as unbiased as any other I have written.


While the performers and the creative team are amateurs they have brought into their midst some professional and semi-professional skills. The setting in the Lebewohlfabrik (not far from Lake Zurich in the Seefeld area) with tables and chairs takes the audience immediately into a cabaret setting and so does the polyglot master of ceremonies Jaroslav Kilian at home in French and Russian. The use of dance and projection of pre-filmed backgrounds works very well. The sketches and songs include familiar and less familiar pieces which span the period from the 19th century to today. This could have easily become a very disjointed programme; yet the production by Sylvia Radzyner and direction by Marie Noëlle Befferal ensures a natural flow from one subject to another from one time period to the next. This is helped by the inventive choreography (by Theresa d'Oliveira). The theatre company's enthusiasm shone through in the performances and infected the audience. The musical numbers are a highlight of the show with the semi professional bass-baritone Ted Kremer performing in English and Russian covering the genres of Musical (Fiddler on the Roof) and opera (Eugene Onegin). The piano accompaniment by Pavel Posdishev is of professional standard. The undisputed highlight of the show are the musical pieces performed and filled with life and grace by the Russian soprano Yelena Bulavko, whose singing and acting would not be out-of-place in any high quality professional theatre ensemble. Her performances of Russian chansons would by themselves already justify the price of the ticket.


An enjoyable evening. If you are in Zurich you could do worse than dropping in at the Café Lebewohlfabrik for a fun evening or afternoon There are two more performances on 12 March at 8 pm and on 13 March at 5pm at the Lebewohlfabrik, Fröhlichstrasse 23, 8008 Zurich.
Reservations +41 (0) 43 533 51 10 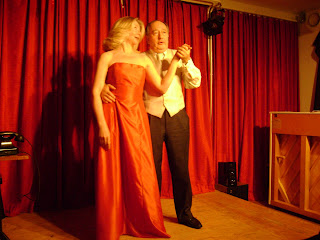 Posted by A London Theatregoer at 15:04