The Theatre of Life: Brüno and Galliano - Gaddafi and Sir Howard Davies

When Sacha Baron-Cohen created his fictional character Brüno, the flamboyantly gay fascista fashionista reporter on Austrian Youth TV, was he aware of any role-models he had met on the cat-walks of Milan, Paris, New York or London?
If so John Galliano, top fashion designer for Dior would qualify as a candidate for inspiring Brüno's political underpinnings, although he seems to totally lack Brüno's charm, intelligence and heart of gold. Witness Galliano's performance in a Paris Brasserie.
Here's a bit of Brüno:
http://www.youtube.com/watch?v=ZsTXbOtS7Oc&NR=1
And here's a bit of Galliano:
http://www.thesun.co.uk/sol/homepage/news/3436757/Film-of-John-Gallianos-racist-rant-in-bar.html
So what would a PR campaigner suggest to Galliano to rehabilitate himself? A call to the Director of the London School of Economics and ex-Bank of England Deputy Governor Sir Howard Davies might be a first step.
Sir Howard Davies featured extensively as a character in David Hare's didactic play about the origins of the 2008 Banking Crisis “The Power of Yes” at the National Theatre. The play is prophetically aptly named for Sir Howard in particular, as it turns out.
http://www.nationaltheatre.org.uk/53565/past-nt-productions/the-power-of-yes.html
Galliano could propose to Sir Howard to fund a new LSE Research Centre on Racism and Antisemitism in the Luxury Industries. After all the LSE already has named its Sheikh Zayed Theatre Lecture Hall after a highly unsavoury character, Sheikh Zayed bin Sultan al-Nahyan. The Zayed centre at Harvard university had been closed down previously after it had come out with outrageously antisemitic and holocaust-denying publications. This however was no hindrance for the distinguished LSE committee ensuring compatibility between funding of research and maintenance of academic standards.
The LSE also provided civil rights research funded by Saif-Al Islam Gaddafi, and awarded him a PhD. Sir Howard Davies himself worked as an advisor to the (Gaddafi's) Libyan Central Bank. You can hear Howard Davies' explanation on how this happened in this BBC radio interview:
http://news.bbc.co.uk/today/hi/today/newsid_9409000/9409266.stm
More recently, the LSE has put Professor Martha Mundy and Dr. John Chalcraft, two vociferous leading members of the anti-Israel Boycott Divestment Sanctions (BDS) campaign in charge of its Middle East Centre. The latter is vaunted as a “centre of excellence” for research on all countries in the Middle East and aims to build ties with universities there. Unfortunately, “due to an oversight”, the map of the Middle East in the Centre's brochures omits the country Israel. Whether this is just a rather extreme form of divestment or a lack of geographical research skills we may never know. Perhaps it is just a clumsy attempt to curry favour with the Middle East Centre's funders from the United Arab Emirates.
A recent report on the Middle East Centre by the organisation Student Rights, which fights extremism on UK university campuses can be found here
http://www.studentrights.org.uk/cms/rc1/wp-content/uploads/2011/02/LSE-Middle-East-Centre.pdf
So what does anti-Zionism have to do with Antisemitism, you may ask? Not much, perhaps; except in the mind and policies of LSE's Director where anti-Zionist funding from Arab sources can be balanced by funding from people “of Jewish origin”, such as George Soros. Here is an original quote from a recent interview the LSE Director gave the Times Newspaper:
“The biggest donor to the School in the past year is George Soros, who of course is of Jewish origin. We operate, I believe, a very balanced view.”

The theatre of life. We may want to give it a miss but, whether we like it or not we're part of this production. 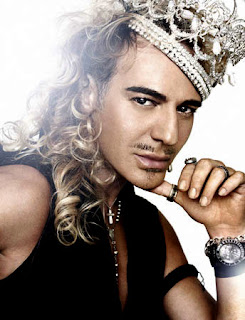 John Galliano
Posted by A London Theatregoer at 01:51