Flare Path by Terence Rattigan, directed by Trevor Nunn at the Theatre Royal Haymarket London, 3.5* out of 5

A Lincolnshire guest house near an airfield during World War II is home to the Royal Airforce aircraft crews of whom Winston Churchill will say after the war: “Never in the field of human conflict was so much owed by so many to so few.” The men live their either alone or with their wives. At the centre of the play is the recently married Patricia (played by Sienna Miller). She has fled a long lasting turbulent with famous matinee idol Peter Kyle into a whirlwind marriage with a young socially awkward fighter pilot, Teddy. But Kyle and Patricia are still in love. At the same time the young aircraft pilot cannot believe his luck, that an attractive sophisticated woman like Patricia would have married him. When Kyle, aware that his status as a Hollywood actor is coming to an end, comes to the guest house to claim Patricia back she has a difficult decision to make. The stakes will transcend personal considerations.
The guest house also houses other couples: a dare devil pilot Polish count recently married to an English barmaid and a gunner and his wife from a no nonsense, salt of the earth working class background.
The play was written in 1943 when a talented, intelligent and sympathetic observer, such as Terence Rattigan was himself part of the ground personnel of the Royal Airforce. His play is a study of the heightened emotional state brought about by a war situation. With intelligence and humour he has written a sensitive study of human character which, of course, is also a bit of a propaganda piece. Rattigan shows us how “situations make a man and not a man a situation”. For man here also read woman.
This is a play that will appeal to an English audience more than to overseas visitors, (although I would have said something similar about the recent film The King's Speech, which has struck a chord with American and other audiences, too.) As a somewhat ironic observer of English attitudes to the World Wars, I could not help being reminded of parodies of this type of piece by British comedians and sitcoms such as 'Allo 'Allo.
Given such caveats, Flare Path is worth a visit. Trevor Nunn's direction is excellent as always. There are also very good acting performances with Sheridan Smith as Doris, Countess Skriczevinsky and James Purefoy as Peter Kyle giving the strongest performances. Sienna Miller is quite credible as the attractive, cool Patricia, a lady who would make a worn out Hollywood matinee idol and a young RAF pilot with anxiety attacks lose their heads (and hearts).
The caricature-like role of the Polish Count Skriczevinsky is not an easy one to perform seriously, but Nunn would have done better to go for a Polish actor rather than rely on an unconvincing attempt of an English actor to play a Polish count.
The theatre was full and the audience very enthusiastic. On this showing This play will have a successful West End run. 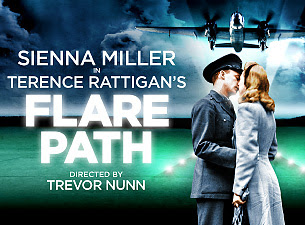 Posted by A London Theatregoer at 15:33