Water, created by Filter & David Farr, at the Tricycle Theatre, London, 4.5* out of 5

A young woman comes to Vancouver. She is a junior member of the British government and a negotiator on climate change. She is here to negotiate with her US counterparts a common stance on carbon emissions targets for the next major worldwide conference round. Privately the woman, who has been clear that her priority is her professional life is going through a crisis with her boyfriend, a record chasing deep sea diver. He is currently thousands of miles away from her. He has done all he can to make this relationship last and is disappointed at her reluctance to commit. She begins to question her priorities.


Also on his way to Vancouver is middle aged environmental officer from the UK. In his private life he is struggling with bouts of depression. He has come to Vancouver for the funeral of his estranged father, a professor of Oceanography at Vancouver University. He meets up with his half-brother and discovers the truth about his father.


Water is a drama about the tension of in life between private happiness, professional success and political realities. The play is very well constructed and holds the audience's attention from beginning to end. The cast is very good, but the stars of this show are the creative team particularly the sound. Water is vibrant, inventive entertaining and stimulating theatre at its best.


Among the “flood” of new plays on environmental issues currently on the London stage (e.g. Greenland, The Heretic), Water stands out for sheer quality and originality adding to the tricycle's highly deserved reputation for excellence.
http://www.tricycle.co.uk/current-programme-pages/theatre/theatre-programme-main/water/ 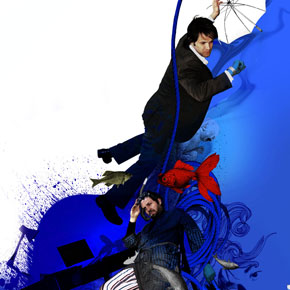 Posted by A London Theatregoer at 11:49