Biutiful, Film/Drama, Mexico/Spain, directed by Alejandro González Iñárritu, 4.5* out of 5

Uxbal makes his living from helping to run illegal street selling and immigration in Barcelona (Spain). He has a heart for the African street sellers and the Chinese man and women living in squalid conditions whose labour he helps to sell to Spanish construction site managers. Uxbal also looks after his two children from his marriage to his estranged, bipolar wife.
A visit to his doctor brings bad news. For the sake of his children and he will have to bring some order into his life. Other people have come to rely on him, too. But terrible trials and tribulations still lie ahead.
Biutful is a deeply moving, sad, intelligent and indeed beautiful film. Xavier Bardem and Maricel Alvarez playing Uxbal's wife are outstanding. The other levers of the cast are excellent, too. The direction and photography reinforce the quality of this film.
Truly deserving of its Oscar Nomination for “Best Foreign Movie”, Biutiful is one of a group of “foreign” and art films - among them Of Gods and Men (Des Dieux et des Hommes) and Blue Valentine - which are of far higher quality than the actual nominees for Oscar-glory in 2011.
http://www.imdb.com/title/tt1164999/ 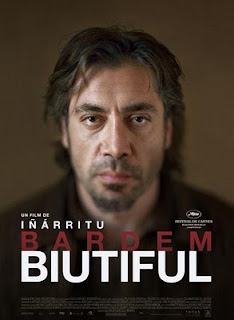 Posted by A London Theatregoer at 19:47