The Human Resources Manager, Film (Israel), directed by Eran Riklis, 3.5* out of 5

A young woman is killed in a suicide bombing in Jerusalem, but for weeks nobody seems to miss her. A large Israeli bakery finds itself in the eye of a media storm when it turns out that she was part of the cleaning crew and apparently nobody at the bakery had noticed her absence.
The owner of the bakery asks the Human Resources Manager to investigate. He finds out that the young woman is a Romanian guest worker who has left her husband and child behind in her native country. In order to repair its image the owner decides that the bakery take on the mission of facilitating a funeral in the employees native Romania and assist her family there. She confides this mission to the Human Resources Manager who has family problems of his own.
The Human Resources Manager is an Israeli road-movie. As Israel is not large enough for a road-movie - you can drive end-to-end in about 3 hours - the bulk of the action takes place in Romania, which has no such limitation. The Romanian location does little to lighten what is a rather sad story. The writer of the screenplay Noah Stollman, who adapted a novel by A.B. Yehoshua, and the director Eran Riklis have managed to infuse a gentle note of humour into this film. This mainly lies in the depiction of the characters and is competently delivered by strong acting performances.
This is Riklis 3rd major film after the Syrian Bride and the Lemon Tree and very deliberately the first one that does not look at the relations between Israelis and Arabs. The way the Human Resources Manager reacts to the bureaucratic and other obstacles put in his way and deals with having to function as an Israeli and in a way represent Israel in another culture provides a good metaphor of the disconnect between the way Israelis are, see themselves and the way they are perceived by others. In this sense, this non-political film can be seen as a bit political, too.
This is not a film of grand powerful emotions but a sympathetic portrayal of diverse, engaging characters brought into contact with each other by a sad event. They all have to deal with the absurd situation they have been thrown into by events as best they can.
It is the portrayal of the characters and our ability to identify with them, that makes going to see this film worthwhile.
http://www.imdb.com/title/tt1311075/ 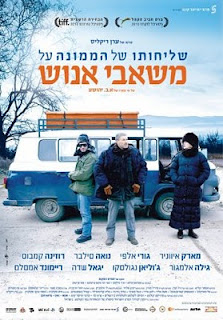 Posted by A London Theatregoer at 12:09