Vernon G. Little, aged 14, the (almost) eponymous hero of the play,based on the 2002 Booker Price winning début novel by DBC Pierre, is in trouble. His best friend just committed a massacre in his classroom and Vernon was found in the grounds of the school holding on to a bag of ammunition. He says he found this bag in the grounds of his school. The finger of the law and the media will soon resolutely point at this hapless Texas teenager, as one misfortune piles upon another.
Vernon Little is the Holden Caulfield for the 21st century. His social context is on the intersection of Bowling for Columbine, South Park and Family Guy (see notes below).
This play about, among other things, mass murder, suicide and serial killing is a riotously funny, serious tour de force accompanied by a cheesy live Country and Western soundtrack which the actors deliver with considerable musical skill. Young people in the audience will laugh at a cynical, crazy, all too real adult world which incorporates everything from the evil child molesting psychiatrist to the beloved but totally ineffectual mother, whose choice in men is less than fortunate.
Meanwhile, we grumpy old adults in the audience are unable to get annoyed by how we are depicted, because we are cunningly distracted by the urge to quietly hum along to the hits of yesteryear - from Glenn Campbell's Galvistan to Johnny Cash's Rings of Fire (in Spanish for good measure).
This intelligent, irreverent and outrageous play is punchily presented in Rufus Norris' fast moving production of very high quality, inventive in many ways, for instance by conjuring up cars from sofas or shopping carts.
The ensemble of actors is outstanding. Johnnie Fiori as Pam and especially Joseph Drake in the title role deserve a special mention.
This is the play to get the age-group from 14 to 24 to love the theatre. The applause at the end of the play from an audience that included many young people was very enthusiastic - deservedly so!
Notes:
Holden Caulfield is the Teenage hero of J. D. Sallinger 1951 novel The Catcher in the Rye
http://en.wikipedia.org/wiki/The_Catcher_in_the_Rye
South Park is a North-American animated situation-comedy TV series created by Trey Parker and Matt Stone
http://en.wikipedia.org/wiki/South_Park
Family Guy is an animated situation-comedy television series created by Seth MacFarlane about a dysfunctional family. The characters tend to regularly break out in song.
http://en.wikipedia.org/wiki/Family_Guy
http://www.youngvic.org/whats-on/vernon-god-little 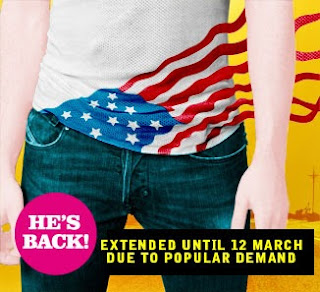 Posted by A London Theatregoer at 21:52