The Heretic, Play/Comedy by Richard Bean, at the Royal Court Theatre London, 3* out of5

At some stage during this play, the daughter of “the Heretic”, a female professor of Earth Sciences at a modern Redbrick University in England, exclaims: this is like being in EastEnders (for overseas visitors to London deprived of quintessential UK TV experiences EastEnders is a long running TV soap-opera on BBC TV).

Perhaps not, but the play The Heretic is more like a light television sitcom than a play worthy of the Royal Court Theatre. Environmental issues are rather incidental to the plot. The question of what can happen to an academic whose findings do not match "group-think", is the subject of this comedy. There are death threats from extreme environmentalists and a not so gentle reminder about the funding implications for the Department from the scientist's boss.

Back to "The Heretic" proper. The first hour of is filled with very funny one liners and quite entertaining. As the play wears on, a rather thin plot is solely the vehicle for gags and one-liners. The supply of gags dries up in the second half of the play. For the last one and half hours, The Heretic turns into a romantic comedy with certain twist and turns of the plot bordering on the pathetic.

The talented cast and creative team are more than this play deserves. Having said that, a packed house applauded warmly; with part of the audience clapping enthusiastically. I guess a few good laughs are especially appreciated in these austere times.

And then there is this: sometimes the plots of comedies can be trumped by real life. The Global Governance research centre. funded by Saif-al-Islam Gaddafi at the London School of Economics might want to send its staff to The Heretic. Moreover, the Middle East Centre at the same university might wish to join them. This outfit would rather remove from their website a map of the Middle East that "erroneously" omitted the a country called Israel, than correct the error by adding Israel to their map. One must assume that this is its tactic to mollify the Emirates Foundation which funds the this research centre. Something very similar is demanded by her department head, from the scientist in The Heretic; except here it's about funding from the environmental lobby. Academic life can indeed be stranger than fiction.

I should mention that most of the reviews in the press are more enthusiastic than mine. You can read them via the link to the Royal Court Theatre's website below. 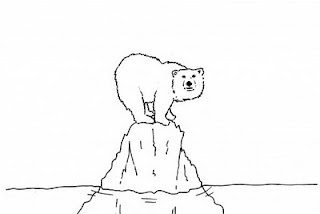 Posted by A London Theatregoer at 20:47