Des Hommes et des Dieux (Of Gods and Men), Film, directed by Xavier Beauvois, 4* out of 5

A group of catholic monks in Algeria enjoy very cordial relations with the local, mainly Muslim community to whom they provide important medical and social services. The monks are respectful of Islam and dedicated to working the land and living their spiritual lives. As a brutal Islamist movement encroaches on the neighbourhood of the Monastery the monks have to decide whether to leave or stay. The heavy handed suppression of terrorism by the Algerian army does not make life easier.
Based on a true story, Des Hommes et des Dieux is a great piece of individual and ensemble acting. Each one of the people in the monastery is an individual with his motivations, fears, strengths and weaknesses. The group dynamics in the discussions among them are beautifully scripted and wholly believable. None of the monks is a fanatic or a hypocrite. The last thing they seek is martyrdom.
After all the scandals of the last decade, the catholic church is in dire need of some positive role models. The Atlas Mountain religious community, skilfully depicted by writer/director Xavier Beauvais goes some way towards restoring the our belief in European and Christian values of practical tolerance and compassion.
The dialogues are very well written and the film is beautifully photographed, acted and directed. Of Gods and Men fully deserves its nominee-status for best foreign film at the 2011 Oscars.
http://www.imdb.com/title/tt1588337/ 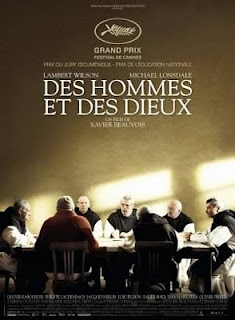 Posted by A London Theatregoer at 18:58